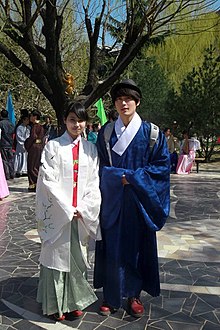 The term Han is derived from the Han Empire , whose founder Liu Bang established his sphere of influence on the Han River in the Hanzhong region. Under the Han Empire (206 BC to 220 AD), the Han ethnic group emerged.

Other dynasties are also used for self-naming. The "South Chinese Han" often called themselves "Tang" ( 唐人 , Tángrén  - "Man of the Tang Empire") after the Tang Dynasty (618 to 907). This term is sometimes still used regionally by the Chinese population in southern China as well as by Chinese abroad in the diaspora around the world and in Southeast Asian countries .

Before that, the Sinite peoples were commonly known as Huaxia (华夏). Today the name Huaxia or Huaren is used as a synonym for Han or Tang Chinese. One of the names of China, Zhonghua (中华; Huaxia in the middle) is also derived from it.

The Han are genetically one of the most homogeneous peoples in the world, but culturally not a purely homogeneous group. Modern state institutions in particular, with their drive for standardization and centralization, deny this heterogeneity. However, this shows z. E.g. the different Han dialects and names for regions and their inhabitants that are older than the eponymous Han Empire (e.g. Wu or Shu ).

Subgroups of the Han are for example:

The Han culture is therefore partly characterized by heterogeneity and variability. The actual culture-forming elements are the common Han script , the partly very different Han dialects and the awareness of a common history, tradition and ancestry.

The Han people arose around the 5th millennium BC. After all, since the 7th century the Han migrated again and again from their original settlement area. Like many other Sinitic peoples and some nomads of Mongolia, they are descendants of the Huaxia and the yellow emperor Huangdi. Han Chinese, other Sinitic peoples and some nomads such as Xianbei or Tuoba are referred to as "Huaren" (Hua people) in order to emphasize their common ancestry.

Within China, the Han thus rose to become the dominant and state-supporting culture , a development that is still being promoted by the central government today, for example through state education and targeted immigration ( Sinization ) in border regions of China ( Tibet , Xinjiang ). In the past there have been repeated protests and state reprisals there. On the other hand, Chinese history from the 17th to the beginning of the 20th century was also significantly influenced by the people of the Sinized Manchu , who were always only a small minority of the Chinese family of peoples, but who controlled the fate of China during the Qing dynasty .

The Han, known as overseas Chinese, have spread all over the world. They have settled in many countries in Southeast Asia over the centuries and now form very large minorities there, especially in Malaysia and Thailand (see also: Thais of Chinese origin ). In Singapore , Han even make up the clear majority of the population. In Cambodia , a large part of the Han minority fell victim to the reign of terror of the Khmer Rouge . Han ( boat people ) were also persecuted in Vietnam . In Indonesia , after General Suharto came to power, genocide committed the country's Han minority, killing tens of thousands. Today only about 3 million Han Chinese live in Indonesia and about 1 million in Vietnam.