Baoding ( Chin.保定市Bǎodìng shì ) is a district-free city in the Hebei Province of the People's Republic of China . It has a history that goes back to the Han Dynasty . Baoding was the capital of Hebei Province until 1958 .

In 2017, almost 1.8 million people lived in the actual urban agglomeration of Baoding. 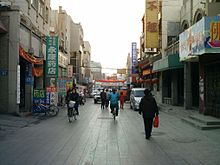 Side street in Baoding

Above all, Yingli Green Energy is internationally known as a manufacturer of ingots , wafers , solar cells and solar modules made of polysilicon . But the automobile manufacturer Zxauto also has its headquarters here. The Tianwei Solarfilms Company, which manufactures solar modules in the thin-film area, is also based there.

The National New Area Xiong'an is to be built in Baoding . 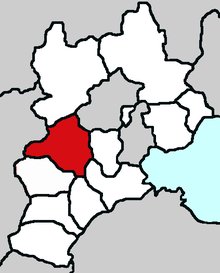 Baoding is made up of three city ​​districts , 18 districts and four independent cities :