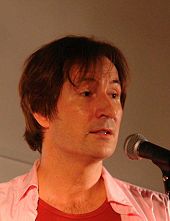 Jan Degenhardt (* 9. July 1962 in Saarbrücken ) is a German lawyer and folk - singer . His father was the political poet and singer Franz Josef Degenhardt (1931–2011). His brother Kai Degenhardt , also a lawyer, also works as a songwriter.

After studying law in Hamburg from 1983 to 1990 and lecturing from 1990 to 1993 at the Ernst Moritz Arndt University and the Grone School in Greifswald , Degenhardt settled as a lawyer in the Greifswald Juristenhaus in 1992 .

In 1999 he released his first album called Aufbruch . With the title of the same name, a biography of a GDR citizen after the fall of the Wall , he made it onto the SFB's best list in 2000 . In the same year he made his stage debut at the Tanz & FolkFest in Rudolstadt , where he took second place in the German Folk Promotion Prize behind the band Schandmaul .

After a tour to present the album, he released his second album in the summer of 2004, entitled Voices Behind the Mirror . The title Marathon Berlin contained on it reached number 9 in December of the same year in the best song list of the Association for German-Language Music.

In February 2011, the third album, called Shameless , followed, for which Degenhardt also translated titles by Joan Baez , Judy Collins , Dirk Powell , Paul Millns and Josh Ritter and recorded them with Carlos Ramos and Christian Renz. Shamlos was named CD of the month by the jury of the best songs list in June 2011. In the same month, the title Democracy reached number 8 on the best songs list and in July to number 2. In August 2011, the album was awarded the German Record Critics' Prize.

Jan Degenhardt is the foster father of two children he raised alone.