The title of this article is ambiguous. Further meanings are listed under Kitty Hawk (disambiguation) .

Kitty Hawk is a small town in the US state of North Carolina that became famous in connection with the world's first motorized flights by the Wright brothers on the beach at Kill Devil Hills, six kilometers south of Kitty Hawk.

Kitty Hawk is a coastal town on Bodie Island on the Outer Banks , an approximately 160 km long, spit-like island strip off the coast of North Carolina , which separates the Albemarle Sound from the Atlantic. 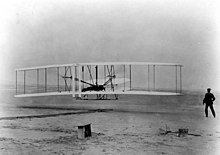 The place was founded in the early 18th century under the name Chickahawk .

Kitty Hawk became world famous after the Wright brothers achieved the first human-controlled powered flight aboard an airplane on December 17, 1903 on the beach of Kill Devil Hills, six kilometers south. On the same day the Wright brothers sent a telegram from Kitty Hawk to their father, so that this event quickly became known all over the world. The fact that Kitty Hawk is considered the cradle of powered flight is due to the fact that Kill Devil Hills only received the rank of city 50 years after the world event. The Wright brothers carefully selected the beach at Kill Devil Hills because of the frequent strong and steady winds and the soft sandy bottom, in order to use it as a starting point for their experiments with gliders in the years 1901-1903.

On December 14, 1903 , they made the first hop with the Wright Flyer they had newly developed . On December 17, 1903 , they finally succeeded in 4 flights with gain in altitude through engine power; hence this day went down in history as the day of the world's first motorized flight. The Wright Brothers National Memorial was erected on the edge of the former airfield ; many plaques on the airfield commemorate the pioneers.