The two state flags of Bavaria are the Bavarian diamond flag and the Bavarian stripe flag in the national colors white and blue. 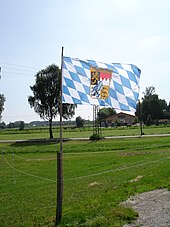 Although Bavaria uses two national flags, it has no special service flag . According to the regulations, the authorities are free to choose which of the two flags is used.

A fixed ratio of width to length is not specified for both flags. Since a ratio of 3: 5 is determined for the federal flag of Germany, this aspect ratio is mostly also used for the Bavarian state flags. The blue shade is not specified, the color sky blue (RAL 5015) is recommended .

The Bavarian national coat of arms is depicted in various forms on many flags . However, this representation is not official and therefore illegal, since the creation and design of state symbols are exclusively reserved for the legislature. However, its use is tolerated.

The Bavarian stripe flag consists of two equally wide stripes in the national colors, with the upper stripe being white and the lower stripe being blue.

The diamond flag is a coat of arms banner of the small national coat of arms of Bavaria . The basic shape contains at least 21 diamonds in the national colors of white and blue, including the diamonds cut from the edges. The number of diamonds can increase with long and narrow flags. In any case, the upper right corner of the flag cloth is intended for a trimmed white diamond. This was confirmed by the administrative order of February 16, 1971.

In flag studies , the flags are described and represented from the front. In Bavaria, the flag is described according to heraldic rules. This means that the description is made from the shield carrier, which is located behind the coat of arms and in this case behind the flag. The upper right corner reserved by the ordinance for a truncated white diamond is on the left for the viewer. 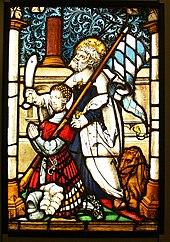 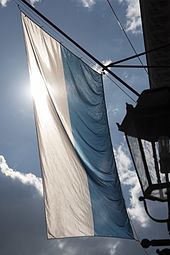 The stripe flag at the Bavarian State Opera in Munich

The white and blue diamonds , also called Wecken , originally come from the coat of arms of the Counts of Bogen , they were taken over in 1242 by the Wittelsbachers , the ruling family of Bavaria from the 12th to the 20th century. From 1337 the Wittelsbachers used the diamond flag as their symbol. After that there were different versions in which other elements were added to the flag, for example the Palatinate lion in the flag of the Dukes of Bavaria-Landshut and Bayern-Munich . There was no official flag for Bavaria, only the rulers carried a flag.

It was only later that the idea of ​​using the white and blue flag as a symbol of the state of Bavaria came up, but all state flags were initially unofficial and therefore not legally stipulated. In 1838 it was determined for the first time that the blue had to have a light shade and on September 11, 1878 King Ludwig II determined for the first time that the flag of Bavaria should consist of two horizontal stripes, white over light blue.

The Munich Soviet Republic existed between April 4 and May 1, 1919 . It carried a simple red flag, but after its suppression the white and blue flag was reintroduced.

After the swastika flag was declared the German Reich and national flag by the Reichsflaggengesetz in September 1935 , the previous Bavarian flag was abolished for official use by an announcement of May 11, 1936 and replaced by the Reichsflagge and the Reichsdienstflagge.

The state constitution of December 2, 1946 confirmed the state colors white and blue and on December 14, 1953 the stripe flag and the diamond flag were officially introduced.

Flag with national coat of arms

Occasionally you can also see a Bavarian flag, usually the diamond flag, with the Bavarian national coat of arms. However, this flag is not official and, according to the OWiG, its use constitutes an administrative offense, but this is de facto not punished.

Other articles: Bundespostflagge  | Flag of the GDR  | Black-Red-Gold  | Flags of the national minorities in Germany  | Sorbian flag  | Identification flag for German merchant ships