The county of Oettingen (also Öttingen ), since the 17./18. Century also Principality of Oettingen , was a direct imperial rule of the Counts of Oettingen around the imperial city of Nördlingen , with the core area in Nördlinger Ries in today's Bavaria and Baden-Württemberg .

In 1141 a noble noble family , who had held the title of count since 1147, named themselves after the town of Oettingen in the Nördlinger Ries . The "older Grafschaft Oettingen" did not have its center in the Ries, but in the adjoining southern Franconian area on the Wörnitz . It was a typical Staufer county, a bailiwick exercised in the name of the ruler . After the sinking of the Staufer in 13/14. Century a conversion to the "younger Grafschaft Oettingen" combined with a stately consolidation in the Nördlinger Ries by taking over the regional royal estate ( Harburg , Alerheim , Wallerstein , Katzenstein ) and a withdrawal from the Franconian possessions. Goods from the Hochstift Eichstätt and other aristocratic estates such as Hürnheim or Truhendingen were gradually taken over. Due to numerous confirmations of ownership and privileges of the emperors and kings, their high jurisdiction and customs rights , a clearly delimited shelf district has formed since the beginning of the 15th century . 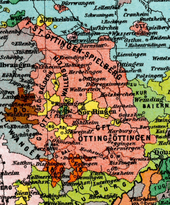 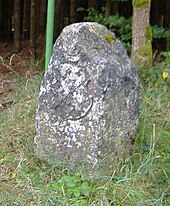 In 1522 the area split into the Protestant line Oettingen-Oettingen , in 1674 raised to the rank of prince , which received seven twelfth of the possessions and died out in 1731, and the Catholic Oettingen-Wallerstein line , which received five twelfth of the possessions. The cities of Oettingen and Wemding were divided. Oettingen was a double seat of princes, divided by denominations according to street sides, the city institutions were occupied jointly or often alternately. The Julian and Gregorian calendars ran side by side. The frequent divisions of inheritance and denominational divisions prevented a successful territorial policy. The property has always remained too small for an independent policy. Despite the division that led the lines into hostile camps, the constitutional unity of the county remained intact until 1806, regardless of further inheritance divisions.

According to the realm register of 1521, the county had to provide 8 horsemen, 45 foot soldiers, 138 guilders for the army .

The right to coin coins existed from the end of the 14th to the middle of the 18th century. There were frequent conflicts over sovereign rights with the imperial city of Nördlingen, which became an enclave of the county. From the 16th to the beginning of the 18th century, Nördlingen filed 103 complaints in this regard before the Reich Chamber of Commerce .

Opposite the Wittelsbach possessions, the Electorate of Bavaria and Palatinate-Neuburg , a clear manorial boundary was formed by 1533. There was a wide conflict zone of overlapping regal claims against the Hohenzollern Principality of Ansbach , which were not finally clarified until 1796.

The Oettingen-Wallerstein line was divided into three lines in 1623/94:

Despite these elevations to the imperial princes , the Oettinger regents in the Reichstag until 1803 only had a share in the curate vote of the count bank of the Swabian Reichskreis . In Article 24 of the Rhine Federation Act , the Principality of Oettingen was mediated by the Kingdom of Bavaria in 1806 . The western part, about a third of the former county, went to the Kingdom of Württemberg in 1810 .