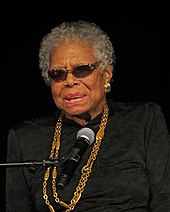 Maya Angelou ( ˈmaɪ.ə ˈændʒəloʊ ;) (born April 4, 1928 in St. Louis , Missouri as Marguerite Annie Johnson ; † May 28, 2014 in Winston-Salem , North Carolina ) was an American writer, professor and civil rights activist. She was an important figure in the African American civil rights movement in the United States. The first part of her autobiography I Know Why the Caged Bird Sings (1970) became internationally known, first published in German in 1980 under the title I know that the caught bird sings .

Marguerite Annie Johnson was the daughter of Bailey Johnson (Navalman and bouncer) and Vivian (Baxter) Johnson (nurse and dealer ). Her older brother Bailey Jr. gave Maya her name - it is a modification of "My" or "Mya Sister" - "My" or "My sister". In 1931, her parents divorced and sent the three-year-old and her four-year-old brother alone on the train to her grandmother Annie Henderson, who lived in Stamps , Arkansas . Maya Angelou describes her grandmother as an African American who lived relatively wealthy during the time of the Great Depression. As the owner of a general store, she was able to sell basic foods and other everyday goods even in difficult economic times. In addition, her grandmother “invested wisely and honestly”.

After a four-year separation, Angelou's father appeared "without warning" at Stamps and took her back to her mother in St. Louis. Maya was raped by her mother's boyfriend, a man named Freeman, when she was eight years old. Maya initially withheld the perpetrator's identity as he threatened to murder her brother. However, Maya later confided in her brother Bailey, whereupon Freeman was arrested. He spent one day in prison and was then released on bail. He was later sentenced to one year in prison. Before he could begin his sentence, he was found dead by the police. Maya became mute after she found out and because she had revealed his name to her brother (quote: "The power of my words led to someone's death.", German: "The power of my words led to someone's death").

Still dumb, she was brought back to her grandmother in Stamps after four years. She found her voice again through the teacher Bertha Flowers, who was good friends with the family. This brought Maya various books and introduced her to numerous authors, such as Charles Dickens , William Shakespeare , Edgar Allan Poe , Douglas Johnson and James Weldon Johnson . In her book I know why the caged bird sings Maya quotes her teacher: “You don't love poetry. You will never love her until you speak her. Until it comes through your tongue, through your teeth, and over your lips, you will never love poetry. ”This statement from Mrs. Flowers moved Maya to start speaking again. At first she quoted from the books on her own and at some point began to speak normally again. Flowers also introduced Maya to African American artists such as Frances Harper , Anne Spencer, and Jessie Fauset . Angelou was particularly impressed by William Shakespeare and especially his sonnet 29 , which begins with the words: “When, in disgrace with fortune and men's eyes, I all alone beweep my outcast state And trouble deaf heaven with my bootless cries, And look upon myself and curse my fate ", German:" When I, overlooked by God and people, appear to me like an outcast, And, since heaven does not hear my plea, curse fate and weep my lot ". Angelou found himself in this sonnet and kept telling: "I thought: Shakespeare is a black girl".

At 14, Maya Angelou and her brother moved back to live with their mother, who now lived in Oakland , California. She graduated from high school at 17 and began working as the first African-American streetcar attendant in San Francisco before graduation, serving as a waitress in nightclubs, working as a cook and briefly as a "madam" (manager of prostitutes). Also at the age of 17 she had her son Clyde, who later renamed himself Guy Johnson.

In 1951 she married the Greek electrician and budding musician Tosh Angelos. However, this marriage lasted only a very short time until 1954. In the same year she changed her name on the recommendation of her management as a calypso dancer from "Marguerite Johnson" or "Rita" to "Maya Angelou". She was increasingly successful as a singer and dancer and toured Europe with Porgy and Bess from 1954 to 1955 . She used her stays in the respective countries to acquire language skills. As a dancer, she was also involved in the world premiere of Max Roach's Freedom Now Suite .

In 1959 she met the writer John Oliver Killens, who moved her to move to New York City to concentrate on writing. She joined the Harlem Writers Guild , where she made contacts with prominent African American authors such as John Henrik Clarke , Rosa Guy , Paule Marshall and Julian Mayfield and published works for the first time.

In 1960 Maya Angelou heard and met civil rights activist Martin Luther King for the first time . Then she organized together with Killens the "Cabaret for Freedom" for the benefit of the Southern Christian Leadership Conference SCLC, whereupon she was named northern coordinator.

In 1961 she went to Africa with the South African freedom fighter Vusumzi Make. She first lived in Cairo and worked for the English-language newspaper The Arab Observer. After separating from Make in 1962, she moved to Ghana with her son Guy and worked at the University of Ghana until 1965 . She was also an editor for The African Review and a freelance journalist for the Ghanaian Times. She described the years 1957 to 1962 in the autobiographical volume The Heart of a Woman. The title was taken from a poem by Georgia Douglas Johnson , a representative of the Harlem Renaissance .

In Ghana, she made friends with Malcolm X during his many visits . She returned to America in 1965 and helped Malcolm X set up the Organization for African Unity . A short time later, on February 21, 1965, he was murdered.

In 1968 she was asked by Martin Luther King Jr. to organize a march, but this friend of Maya was also murdered on April 4, 1968. Maya Angelou was devastated by the murder of two of her friends and key figures in the African American freedom movement. However, she found support in her friend James Baldwin . While attending a dinner party together, Random House editor Robert Loomis encouraged her to write a book about her life. She then wrote her first autobiography I Know Why the Caged Bird Sings, which gained international fame and recognition.

Although Maya Angelou did not have a university degree, she was appointed professor of American Studies at Wake Forest University in Winston-Salem in 1982 . She was previously visiting professor at several universities. She also wrote the script and music for the film Georgia, Georgia. The XM satellite broadcast her talk show once a week on the Oprah Winfrey channel. Angelou was also active as a poet .

Maya Angelou read at the inauguration of American President Bill Clinton on January 20, 1993. This made her the first female poet to receive this honor after Robert Frost , who spoke at the inauguration of John F. Kennedy in 1961. As a result of this performance, she was asked to recite for the United Nations in the 1995 Million-Man March . Here she read her poem A Brave And Startling Truth. Angelou had been a supporter of the Unity Church of Christianity from her youth .

Singer and actress Queen Latifah recited her poem We had him at the memorial service for Michael Jackson at the Staple Center in Los Angeles on July 7, 2009 . In 2008, she first supported Hillary Clinton's presidential campaign. After Barack Obama won the primary, she postponed her support for his campaign and spoke publicly at some election rallies. When he was sworn in as the first African American president, Angelou said, "We are growing beyond the idiocy of racism and sexism."

On the occasion of Nelson Mandela's death in December 2013, Maya Angelou wrote the poem His Day is Done and posted it as a video on the Internet, a gesture of appreciation for the already sick author and civil rights activist, who was no longer able to attend the funeral ceremonies in South Africa.

In 2013 Angelou published her seventh biography in a series called Mom, Me & Mom , which focused on her relationship with her mother.

It was included in the anthology Daughters of Africa , edited in 1992 by Margaret Busby in London and New York.

As a Broadway star in "Look Away," she was nominated for a Tony Award and an Emmy for her role in the television series Roots . As an author she has received numerous honors, from the Quill Award for poetry to the Mother Teresa Award (both in 2006). In 1993 she read her poem "On the Pulse of Morning" at the inauguration of President Clinton. The audiobook editions of her books earned her several Grammy awards. Among them, for example, “A Song Flung Up To Heaven”, which won the “Best Spoken Word Album” in 2002.

In 2011 she received the Presidential Medal of Freedom, the highest civilian honor in the United States.