Bobingen is a city in the Swabian district of Augsburg .

The place is about twelve kilometers south of Augsburg on the rivers Wertach and Singold and borders on the Augsburg-Westliche Wälder Nature Park .

There are 6 officially named parts of the municipality :

The place name goes back to the Alemannic settler "Pobo" (around 506). Around 993 Bobingen was called “Pobinga” (“with the people of Pobo”). Around 933, Bobingen was first mentioned in a document in the Vita S. Udalrici . Bobingen in what is now the Swabian district was later the maintenance office of the Augsburg bishopric . With the Reichsdeputationshauptschluss of 1803, the place came to Bavaria . In 1847 it was connected to the Ludwig-Süd-Nord-Bahn ( Lindau - Hof ). In 1899 the artificial silk factory was founded (production started in 1902).

In 1938/39 the Fasan explosives factory was built southwest of the urban area of ​​Bobingen . Towards the end of the Second World War, the factory produced a large part of the explosive hexogen for the Wehrmacht .

The remains of the Bobingen castle stables , a former moated castle and its successors, were removed around 1967 in the course of the new construction of the now old fire station and a Red Cross station. In 1953 Bobingen's market survey took place, and in 1969 it was granted city rights . In 1972, as part of the municipal reform, the towns of Straßberg and Reinhartshausen were incorporated with Burgwalden .

Bobingen then belonged to the Augsburg district. 1975 Waldberg and Kreuzanger were incorporated. In 1993 the Singoldhalle, the Bobinger Stadthalle, was completed. In 1994 Bobingen celebrated its 1000th anniversary in connection with the city's 25th anniversary.

There are several versions of this story from “Bobinger Büble”. In a second, later version, it even ends with the arrest and execution of the legendary figures.

However, this cannot be historically correct, as there was no gallows in Bobingen and therefore no executions were carried out. The place of execution of the high judiciary was located in Schwabmünchen .

The following legend is the earliest version after Alexander Schöppner's "Bavarian Legends":

The large and beautiful village of Bobingen is three hours south of Augsburg, on the so-called Hochstraße . But then it is not good to ask: “Where is Bobingen going?” And some have bloody heads as a result: at least one is treated with abuse and ridicule and the most blasphemous speeches, he can only ask whoever he wants. This is because a long time ago a fellow from Bobingen was brought to justice. The defendant turned to an attorney in Augsburg, who had a reputation for being able to "fight through" anything. The latter advised him to act stupid in court and to give the answer "Bobingen to" to every question put to him, while pointing with the right hand under his nose from the right to the left side. He did exactly as he was advised and, as there was no confession or anything else, he was released by the court. After a while he came into town for business and met the lawyer who curiously asked him about the outcome of the proceedings. After hearing of the happy success he said, “Now it is up to you to reward me for this advice; I ask for two Karolin for my endeavors. ”But the boy threw the astonished man a“ Bobingen zu ”, turned around the street corner and since that time has kept the lawyer waiting for his wages.

In 1841 the young village of Königsbrunn, which did not yet exist at the time of the formation of the community in 1818, was spun off from Bobingen and became an independent community.

On July 1, 1972, the previously independent communities Reinhartshausen and Straßberg were incorporated . On July 1, 1975, Waldberg and parts of the area of ​​the dissolved Kreuzanger community were added. Finally, on May 1, 1978, parts of the neighboring community of Wehringen, which then had around 25 inhabitants, were taken over. 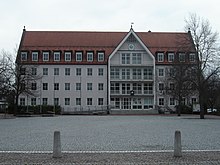 Since the last local election on March 15, 2020 , the city council has been composed as follows:

France : There has been a twinning with the northern French city ​​of Aniche since 1969 . 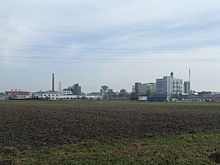 In the 19th century, a rayon factory was set up in Bobingen , later a polyester fiber production ( PET base). After the war, the site became part of Hoechst AG . In the course of the split-up of Hoechst AG, the location was converted into the "Industriepark Werk Bobingen (IWB)" in 1998. The chemical activities in the area of ​​polyester fiber production are today (2012) distributed among three companies ( Trevira , Johns Manville, Nextrusion). The infrastructure and services are provided by various service providers. The site houses a total of 16 companies (as of 2010) on around 80 hectares with around 1450 jobs.

The first municipal hospital in Bobingen was opened in 1858. In 1953 a new building was built, which was expanded in 1957/58. After the capacity became insufficient in the 1960s, a new building was opened at the current location near the Wertach River in 1969. In 1997 and 2000 conversion and renovation measures took place. In 2006, the joint municipal company “Wertachkliniken Bobingen and Schwabmünchen” was founded, and the previously independent hospitals were now united under one roof.

The Wertach Clinic Bobingen has a capacity of 130 beds with the main departments:

In addition, the following specialist disciplines are carried out by attending physicians:

The rescue station of the Bavarian Red Cross is located at Krumbacher Strasse 4 in Bobingen. An ambulance and an ambulance are stationed here.

The RTW is manned 24 hours a day, the KTW 8 hours during the week. There is no clearly defined area of ​​responsibility here. The integrated control center in Augsburg always alerts the next available rescue equipment, administrative boundaries (e.g. rural districts) play no role here. Areas of application are the southern district of Augsburg and the city of Augsburg.

The fire station of the Bobingen volunteer fire brigade is located on the corner of Michael-Schäffer-Strasse and Hoechster Strasse in Bobingen. A fire fighting and an arming train are stationed here. There is also no clearly defined area of ​​responsibility here; the FFB, like the rescue service, is alerted via the ILS Augsburg. The area of ​​operation includes approximately the core town of Bobingen with the Bobingen settlement, as well as all districts of Bobingen and the places Königsbrunn, Oberottmarshausen, Wehringen and Großaitingen to support. The FFB was founded in 1871. On average, the FFB goes out for around 130 missions a year.

In the districts of Straßberg, Reinhartshausen and Waldberg / Kreuzanger there are independent fire brigades, each with a portable pump vehicle . 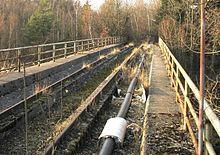 The double-track main line from Augsburg to Buchloe runs through Bobingen . The Bobingen train station is located east of the city center . The separation station is the beginning of the Lechfeldbahn via Kaufering to Landsberg am Lech . The station has five platform tracks, but is not barrier-free . The Augsburg – Buchloe railway line is operated by Deutsche Bahn under the course book lines 971 and 987 and served at least every half hour. The Lechfeldbahn to Landsberg is operated as timetable route 986 every hour . There is a calculated 15-minute cycle between Augsburg and Bobingen. The station is located in the area of ​​the Augsburg Transport Association (AVV). The railway lines running through the station are integrated into the AVV as AVV regional trains R7 Augsburg– Schwabmünchen and R8 Augsburg– Klosterlechfeld .

Bobingen station was opened in 1847 by the Royal Bavarian State Railways as a through station on the single-track section Augsburg – Buchloe– Kaufbeuren of the Ludwig-Süd-Nord-Bahn . In 1877, the Lechfeldbahn to Landsberg was opened, making the station a separation station. In 1902 the Ludwig-Süd-Nord-Bahn was expanded to double tracks and the track system of the station was expanded. It received a platform underpass , wooden platform roofs and two mechanical signal boxes . The construction of a siding to the artificial silk and powder factory in Bobingen in 1915 led to a sharp increase in freight traffic. From 1938 the siding also served to connect the Fasan explosives factory , after the Second World War it connected the Hoechst paintworks , now Trevira , to the railway. After a decline in the 1960s and 1970s, local freight traffic ceased in the 1990s and some freight tracks were dismantled. The siding is still served today. The integration of the station into the Augsburg transport association in 1985 and into the Allgäu-Schwaben-Takt in 1993 led to an upturn in passenger traffic and a steady increase in passenger numbers.

The reception building from 1847 has been preserved to this day. It is a two-storey building with a gable roof , which has a return on the track and street side. Originally made of exposed brick , it is now plastered. After the opening of the Lechfeldbahn, it received a single-storey extension with an open waiting hall until 1880.

Municipalities in the Augsburg district