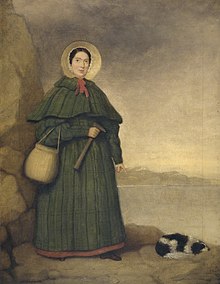 Mary Anning left her dog at the site while she sought help with the removal of the fossils.

Born in the situated on the southern English coast village of Lyme Regis in Dorset, Mary Anning is said at the age of 15 months as unusual to be noticed: As in 1800 struck a flash in the village, who scored four women, was the only survivor the young Mary. Mary was one of ten children of whom only she and her brother Joseph survived childhood. Mary was named after her eldest sister, already called Mary, who died a few months before she was born at the age of four.

Mary's father, Richard, was a carpenter who supplemented his income by looking for fossils on the cliffs near Lyme Regis, which he then sold to tourists. When he died of tuberculosis in 1810 , the Anning family was left without a breadwinner, and Mary and her brother Joseph began large-scale hunting for fossils that could be sold to supplement the family income.

Collecting fossils had become fashionable in the late 18th and early 19th centuries. Initially no more than a hobby, the importance of fossils for geology and biology was gradually recognized . If Mary Anning started collecting simply to earn a living, she soon had connections with the geologists and biologists of her time.

The first occasion was the discovery of the skeleton of an ichthyosaur , a fish dinosaur , a few months after the death of her father. A year earlier, her brother had discovered a skull that looked like that of a large crocodile. The rest of the skeleton could not be found initially until Mary found the rest of the body after a storm that tore off parts of the cliff. This was the first complete ichthyosaurus skeleton to be found up to that point. Parts of skeletons had previously been found and the species had been described in 1699 using fragments discovered in Wales . However, the important find of a complete skeleton found its way into the Transactions of the Royal Society . Mary Anning was twelve years old at the time.

As it became more popular, it caught the eye of Thomas Birch , a wealthy fossil collector. Touched by the poverty of Mary and her family, he sold his own collection of fossils to the Anning family for £ 400. With a somewhat secure (albeit still very little) financial support, Mary continued her search for fossils, even after her brother found work as an upholsterer .

Mary Anning made her significant fossil discoveries on the cliffs at Lyme Regis .

Their next large fossil find was that of a Plesiosaurus dolichodeirus in 1821, the first that was found of this genus and which has not been surpassed in quality to this day. It was scientifically described by the paleontologist and geologist William Daniel Conybeare . In 1828 she found a pterosaur as the third major find , described by William Buckland in 1829 as Pterodactylus macronyx ( Richard Owen later placed the species in the new genus Dimorphodon ), the first find outside of Germany ( Gideon Mantell believed his pterosaur fossils, described in 1827, to be the Remains of a bird).

With these three significant finds, Mary Anning found her place in paleontology . Her achievement was not only her extraordinary ability to find fossils, but also the care and patience with which she excavated them. She worked on the excavation of the Plesiosaurus for ten years without external support using the simplest of tools. In addition, she - who never had any kind of scientific training - was both able to competently draw and aptly describe her findings. 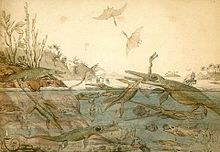 The watercolor Duria Antiquior ("Ancient Dorset") painted by Henry Thomas de la Bèche in 1830 is the earliest attempt at a reconstruction of extinct creatures in their environment. The Plesiosaurus , recognizable by its long neck , the Ichthyosaurus and the pterosaurs above go back to Anning's findings. With the proceeds from the sale of copies of this picture, de la Bèche supported Mary Anning financially.

Mary Anning searched for fossils her entire life and contributed significantly to the development of early paleontology with her discoveries. In her late thirties, she received an annual pension from the British Association for the Advancement of Science in recognition of her achievements.

Mary Anning died of breast cancer at the age of 47 . When her illness became known, the Geological Society of London raised money for her in 1846 . In July 1846, a few months before her death, she was made the first honorary member of the new Dorset Country Museum .

Mary Anning's findings were important evidence of the extinction of animal species. Up until their time it was the common belief that animal species did not become extinct; every strange find was declared an animal still living somewhere in an undiscovered part of the world. The bizarre nature of the fossils Anning found undermined this argument and supported Georges Cuvier's controversial thesis that they were extinct species. This paved the way for an understanding of life in previous geological ages.

The coast where Mary made her discoveries is now one of the most famous sites for dinosaur fossils in the world. The oldest layers of the coast come from the Triassic and can be dated to an age of approx. 250 million years, the youngest layers come from the end of the Cretaceous - thus they cover a large part of the Mesozoic, an earth epoch dominated by dinosaurs. It is generally Jurassic Coast called and belongs to the world heritage of UNESCO .

Mary Anning herself was forgotten after her death, but has been rediscovered in the last few decades as one of the most important and extraordinary figures in early paleontology.