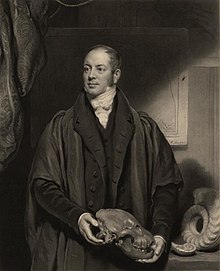 William Buckland (born March 12, 1784 in Axminster , † August 24, 1856 in Islip ) was an English theologian and one of the most important geologists and paleontologists in the early days of this science. He was the first scientific descriptor of Megalosaurus , one of the first three known dinosaurs . In 1823 he also discovered the world's first fossil of an individual of the genus Homo , the so-called Red Lady of Paviland .

Engraving of the fragment of the right lower jaw of Megalosaurus from Stonesfield near Oxford, described by Buckland, from the first description Notice on the Megalosaurus or great Fossil Lizard of Stonesfield from 1824.

Buckland was born in Axminster , Devon in the UK . He studied at Corpus Christi College Oxford , where he was given a lectureship in mineralogy in 1813 as a successor to John Kidd , who followed in 1819 in geology . In 1818 he became a member of the Royal Society and from 1824 to 1826 and again from 1839 to 1841 he was President of the Geological Society of London . In 1822 he was elected a member of the Leopoldina , and in 1825 he was elected to the American Academy of Arts and Sciences . In 1838 Buckland was introduced by James Roberton († 1840) as member number 141 of the Société cuviérienne . From 1839 he was a corresponding member of the Académie des sciences . In 1847 he was appointed to the board of directors of the British Museum and in 1848 received the Wollaston Medal from the Geological Society of London.

Buckland's reputation as a geologist and paleontologist is based on his published scientific work. In his book Relics of the Deluge (1823) he commented on the fossil record of extinct animals found in the Kirkdale Caves in Yorkshire with reference to the biblical account of Noah's Ark . Until, under the influence of Louis Agassiz, Buckland was a proponent of the flood theory . In his inaugural Oxford lecture (entitled “A Declaration of the Connection between Geology and Religion”), he named it as the goal of geology: “to confirm the testimonies of natural religion; and to show that the facts they developed coincide with the accounts of creation and the Flood in the Mosaic Scriptures ” .

After meeting Louis Agassiz, he developed into an early proponent of Agassiz's glacier theory and then worked intensively on finding evidence of a former glaciation in Great Britain.

The Dorsum Buckland on the Earth's moon is named after him.

Frank Buckland (1826–1880), son of William Buckland, was a surgeon and journalist; he is known for Curiosities of Natural History . 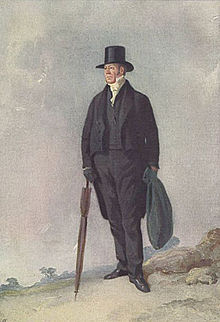 The painting from 1843 shows Buckland at the age of 59. The blue bag, which was well known at the time, contained the collected fossils.

William Buckland was a colorful personality and known as an eccentric , who also carried out field research in an academic robe and top hat and liked to entertain evening parties with amusing lectures on his latest bone finds. He always carried a blue bag with him, which he filled with geological finds picked up along the way. On his premises in Oxford and Westminster, Buckland housed a large number of animals, some of which were exotic, and which often roamed free. Buckland was also known for his gastronomic experiments. He is said to have had the ambition to eat his way through the entire animal kingdom by eating a specimen of every known species.