The DB series 181 includes dual-system locomotives that were procured by the Deutsche Bundesbahn from 1966 onwards especially for cross-border traffic to France and Luxembourg . The pilot series was called the E 310 series when it was commissioned . After 1968, these four prototypes were classified as class 181.0 and 181.1 in the DB class scheme due to technical differences , before 25 series locomotives were put into service as class 181.2 from 1974 .

After extensive test runs , the four dual-system locomotives were put into scheduled operation in 1966. These locomotives were primarily used in passenger transport in front of express trains between the French cities of Metz , Saarbrücken , Kaiserslautern , Mannheim , Heidelberg or Darmstadt and Frankfurt am Main . In freight traffic , the locomotives were mainly used between Saarbrücken Rbf and Forbach / Grenz as well as Trier and Perl / Apach , after 1979 with the sister locomotives of the 184 series . The parade operations from 1970 to 1975 included the TEE  50/51 Goethe between Metz and Frankfurt / Main in front of former Inox cars of the TEE Mistral .

The pilot series locomotives distinguished mainly by their electric brake : the E 310 001 and 002 had a dynamic brake , so they built the kinetic energy of the suspended train with braking resistors from. The other two machines fed the electricity generated during braking back into the catenary network . From 1968 the locomotives with braking resistors became the sub- series 181.0 , which with the regenerative brake became the 181.1 .

Cross-border rail traffic experienced a real boom in the following years , and further routes between France, Luxembourg and Germany were electrified . This resulted in an increased need for multi-system locomotives. Therefore, the Federal Railroad ordered twenty-five more machines of the 181 series in 1972, but these were technically improved again. These changes, which mainly affected the drive and the control electronics, were so extensive that they were referred to as the 181.2 series. The locomotives were delivered from 1974 to 1975. The most striking external difference on the three removable engine room hoods is that the fan grilles have been pulled up to the edge of the roof. The higher fans made it possible that the air could no longer be directed through the engine room , but directly to the traction motors . The traction motors, however, were of the same basic type, with identical continuous output . The top speed was increased with a higher permissible speed of the electric motors from 150 km / h to 160 km / h.

As the pilot series locomotives were also these machines in rapid rail Metz-Saarbrücken-Kaiserslautern-Mannheim-Heidelberg / Darmstadt-Frankfurt used, often with Corail wagons of the SNCF . Likewise, the fast and were fast trains on the routes Saarbrücken-Trier-Koblenz ( Saar Railway , Mosel route ) to the inserts in passenger transport. The use of freight trains was limited to the Saarbrücken – Forbach / Grenz, Trier – Perl / Apach and Wasserbillig –Luxembourg routes, where the locomotive also came with passenger trains.

They were later deployed between Strasbourg - Kehl - Karlsruhe and Stuttgart . The locomotives were used for return services in front of domestic French passenger trains on the Strasbourg – Metz route. It was not until 1990 that the 181 series were used in front of the new Saarbrücken – Mannheim – Stuttgart interregional trains, where they were replaced by the new 120 series locomotives only one year later due to the new Mannheim – Stuttgart line .

After the start of the Intercity Express service between Frankfurt and Paris and the TGV service between Munich / Stuttgart and Paris, the areas in which the 181 series was used continued to shrink. Since December 2007 they were to be found before trains on the IC line Norddeich –Luxembourg between Koblenz and Luxembourg, and partly on the IC line between Frankfurt (Main) and Saarbrücken. Since the timetable change in December 2013, the pair of trains IC 360/361 no longer started or ended in Strasbourg, but in Basel Bad Bf, so that no 181 trains were used as planned for these services. With the discontinuation of IC traffic between Koblenz and Luxembourg when the timetable changed in December 2014, the use of the 181 series fell rapidly.

On the evening of December 12, 2009, the 181 218 brought the last scheduled Orient-Express ( EN 469) at 20:37 from the departure station in Strasbourg to Karlsruhe, where it was replaced by a locomotive of the Austrian Federal Railways . In doing so, she said goodbye to one of the most famous rail connections after more than 120 years.

Since the timetable change in December 2011, the class 181 locomotives have increasingly hauled the Intercitys on the line between Stuttgart and Zurich ( Gäubahn (Stuttgart – Hattingen) ) alongside class 101, 115 and 120 locomotives.

Since December 2014, only four locomotives of the series have been used as planned. The main area of ​​application was the intercity between Frankfurt and Saarbrücken. For this reason, 181 were increasingly retired in the following time. In the timetable from December 2015, the intercity to Saarbrücken was omitted. Except for a Euronight covering (Paris-Moscow) from Strasbourg to Karlsruhe and back, no more scheduled long-distance trains were covered with a 181. Most recently, the 181s were occasionally used in front of freight trains between Saarbrücken Rbf, Trier, Neunkirchen and Kaiserslautern-Einsiedlerhof. 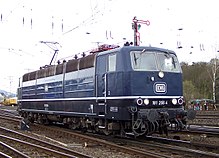 181 206 at a vehicle parade of the DB Museum in Koblenz - Lützel , a branch of the Transport Museum in Nuremberg

The wheel arrangement is Bo'Bo ', so the locomotives have two bogies with a total of four traction motors and four individually driven axles . The power is transmitted by means of a rubber ring cardan drive . In the pre-production series, the wheelset guidance was still implemented using rubber roll springs, while the lemniscate linkage was used in series production. In the pilot series, the tests showed that at speeds of 120 km / h or more, the locomotives ran restlessly due to vertical vibrations in the vehicle frame. Therefore the pins of the bogies were shortened and their linkage moved upwards. However, this increased the tendency to skid when starting up. With the series locomotives, the Krupp company was able to fall back on experience with the DB class 151 , from which the Lemniskatenlenker was taken over. The center distance of the bogies has also been reduced. All of this resulted in improved running properties.

The locomotives obtain their energy via two pantographs with contact strips of different lengths for the different areas of application from the 15 kV / 16 2/3 Hz or 25 kV / 50 Hz contact line. The voltage is fed to the main transformer via a main switch operated by compressed air. On the secondary side, the traction motors are controlled by thyristors using stepless phase control, a technology that was modern at the time, as were the comparatively light mixed current motors. Mechanical switchgear was no longer necessary, and the vehicle control system also works with modern electronics. For a good frictional connection between rail and wheel, the converters always regulate a slightly lower tractive force for the leading wheel sets of each bogie. However, if one or more wheel sets skid, the drive control regulates the tractive force back briefly.

Taking into account the lower-hanging overhead line in France, the decision was made to use a locomotive body with a lower overall height. A special feature is the asymmetrical equipment with windows and ventilation grilles. One side has seven grilles, while the other has the same number of windows instead of the three middle ones. The almost 17 meter long, 84 ton heavy locomotives reach speeds of up to 150 km / h for the prototypes and 160 km / h for the series machines with continuous outputs of 3300 kW.

In the engine room there was only one Z-shaped central aisle instead of the previous two side aisles.

The first locomotives were delivered in the cobalt blue paint scheme that was still common at that time for express locomotives . From 181 211 the new ocean blue-beige color scheme was used. It wasn't until 1992 that the first 181.2 was launched in an oriental red lacquer with a white bib on the forehead. From 1998 the traffic red paint became common on the first locomotives .

After the sale by DB Fernverkehr AG in May 2020, locomotive 181 215 was given the red-beige IC paintwork for the class 181, which was never historical, but was often fantasized by railroad fans.