As a shuttle train ( Switzerland : shuttle train ) are traits refer to operations where in a change of direction, the train (the locomotive or railcar must not be implemented).

With push-pull trains, the use of passenger trains can be made more efficient and faster, as the locomotive can remain at the respective end of the train when the train changes direction in the terminal or turning stations.

For remote control with a control car, the traction vehicle must be equipped accordingly, and the same push-pull train control or multiple control (Switzerland) must be used.

The advantage of the push- pull train or shuttle train over the multiple unit (a firmly connected train made up of partially powered passenger cars without a recognizable locomotive) is the possibility of using normal cars as intermediate cars if they are equipped with the necessary cables. Conversely, most intermediate wagons can also be used as wagons in conventional train sets.

In the past, local trains were predominantly push- pull trains in Germany , but now long-distance trains are also common as push-pull trains. In this way, a higher number of journeys can be achieved with fewer trains. Furthermore, there is no need to provide a shunting track or additional staff ( shunters ).

Commuter trains and the multiple controls required for them have a long tradition, especially in Switzerland. This also has to do with the fact that the push-pull train or shuttle train control is dependent on electrical signal transmission. The presence of an electrical control of the traction drive is more likely on an electric vehicle than on other vehicle types. In this way, a direct electric remote control could be installed in electric vehicles at an early stage and often with little extra effort.

The Martigny – Châtelard-Bahn (MC, today TMR) acquired the first control cars for shuttle trains in Switzerland in 1906. In 1921, the SBB ordered the first Ce 4/6 multiple units with the intention of using them in pairs or together with a control car as shuttle trains. After successful attempts after delivery in 1923, additional luggage railcars Fe 4/4 with identical multiple controls were put into operation from 1927 . Today almost all passenger trains in Switzerland are shuttle trains or multiple units.

In Germany , special push-pull trains were probably first used on the Lübeck-Büchener Railway in May 1936 as city express trains with double-decker cars. The steam locomotives specially built for this train were tender steam locomotives with streamlined cladding that could be remotely controlled by the driver from the other end of the train .

The electric locomotive E 04 23 was equipped for push-pull operation in 1939 and tested on the Munich suburban railways until 1945.

In the 1950s, the Deutsche Bundesbahn built several class 78 and class 38 steam locomotives for push-pull trains . B. between Frankfurt and Wiesbaden . The engine driver only had direct access to the brake . He passed on the commands to accelerate or maintain the speed to a specially trained stoker who operated the regulator and control ( indirect push-pull train control ).

For details on the history of the first push-pull trains in Germany, see the LBE's double-decker streamlined push- pull train . 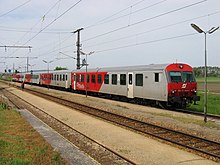 CityShuttle push-pull train of the ÖBB in Michelhausen, Lower Austria (2004)

The emergence of power-dependent and thus indirect speed step control in electric traction vehicles in the 1950s made a new generation of remote controls possible. A simplification became possible here, since only orders have to be sent to the locomotive. This type of remote control no longer necessarily has to deal with all vehicle-specific features, since the effective activation process no longer depends directly on the remote control command. The exact position of the step switch is no longer specified, but rather whether it should switch a step on or off as soon as the specifications allow it. It was therefore also more possible to control different types of vehicles from one control car, since this type of control is no longer linked to the number of speed levels, but only to the type of control. The signal transmission was still analog, but the number of wires in the cable harness could be reduced or released for other purposes.

The next generation of remote control is related to the introduction of power electronics. If a locomotive is controlled by a computer, it can logically also be used for remote control. The effort of setting up such a remote control on the vehicle itself is relatively low. With an additional computer it is also possible to translate “foreign” remote control commands. Locomotives delivered today are usually remotely controllable or prepared for it. As a rule, multiplexed electrical data transmission is used on push-pull trains , while some of the data on multiple units can also be transmitted via fiber optic cables .

A special form is remote control by radio, which is rarely used on push-pull trains.

In the case of traction vehicles, it is common today to train them as full-fledged bidirectional vehicles. In contrast to steam locomotives with a tender, it makes no difference whether they drive forwards or backwards. If these locomotives are designed as passenger railcars and operate without additional cars, they can be used operationally like push-pull trains. The transition between the motor vehicle and push-pull train can therefore be fluid, and the layperson cannot always tell whether it is a multi-part multiple unit or a push-pull train. Because the difference today is only the question of whether the train can be disconnected in regular operation or not.

A turning loop can be created to avoid driving around the locomotive at terminal stations . This is mainly used in trams, whereby one-way vehicles are often used that only have doors on one side.

Turning triangles are also common in America , with which the entire train is turned. Because in this way the order of cars can be maintained from the top and the final car remains the final car.