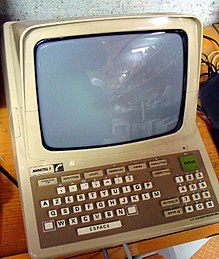 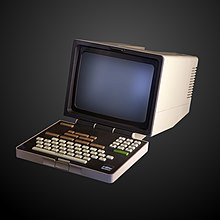 Minitel was an online service primarily offered and used in France for around 30 years . The system was introduced on a small scale in Saint-Malo in July 1980, then on a trial basis in several departments from autumn 1980 , and from 1982 throughout France. The dial-in number 3615 for Minitel use enabled millions of French people to access electronic information and entertainment services for several decades thanks to the ease of use of the terminals. The service was finally discontinued on June 30, 2012.

Minitel originally only referred to the screen terminals that were connected to the service actually called Télétel based on the Videotex standard; in general usage, however, metonymy Minitel prevailed for the entirety of the offer.

A comparable German offer was the screen text (BTX) launched in 1983 , which, however, was not even nearly as successful.

In the 1970s, the French government under President Valéry Giscard d'Estaing commissioned the state post and telephone company PTT ( Poste, Téléphone et Télécommunications , today La Poste and Orange ) to develop this system . This successfully implemented the task and introduced the system in France. In contrast to BTX in Germany, Minitel was able to assert itself much more comprehensively in France. One of the reasons for this was that the necessary hardware was made available by PTT free of charge in France. After test operations in the Ille-et-Vilaine and Velizy departments in the autumn of 1980, Minitel started up on a large scale in 1982. From the beginning, the French were able to access the digital version of the telephone directory free of charge through Minitel. Customers could choose between a hard copy phone book or a free Minitel terminal. As a result, the system reached a critical number of users early on. In 1990 Minitel already had four million users. According to the PTT, it spent 8 billion francs on Minitel terminals in the first eight years, made 3.5 billion francs in profit (after passing on payments to service providers such as newspapers, etc.), and saved an average of 500 million francs a year through no printed telephone books.

Initially, the Minitel devices were manufactured with an "ABCDEF" keyboard built strictly according to the alphabet, which was later changed to the common French typewriter keyboard ( AZERTY ). The newspaper industry in France initially fought the network, fearing the loss of classifieds. For the time, the service was very progressive and spreading rapidly.

Originally the number 11 was dialed into the digital phone book, and the first three minutes were free. Other services were originally available through dial-in via long telephone numbers such as (16) (3) 613 91 55, which were abbreviated to a four-digit speed dial (in this case 3613) from mid-1986. These services were in particular:

The German screen text system (BTX), which is comparable to Minitel and which was launched with great pomp in 1983, only had around 100,000 users in 1988. In October 1992, Swiss Post reported 15,600 subscribers for the Austrian equivalent of the same name launched in 1984 with the MUPID , which is primarily offered as a rental device .

Initially had a number to be typed, then placed the Minitel terminal by means of a built-in modems to V.23 standard to connect to the local access node ( Point d'Accès Vidéotexte shortly PAVI ) ago. This called up the content via the X.25 network TRANSPAC (in Germany and Austria Datex-P ) from the respective service provider. In contrast to other services such as the German screen text, there was no central database. For this reason, dynamic offers were also widespread.

Originally, Minitel was only supposed to replace the heavy telephone books and provide telephone information. However, new services that the French liked to use were offered relatively quickly: u. a. the weather report, account balance inquiries, bank transfers, train ticket orders, travel bookings and even share purchases. Popular sex services were also offered under the name Minitel rose . The founder of today's telecom operator Free , Xavier Niel , got rich from these services. The system also offered the possibility of written communication between users (a kind of archetype of chat ).

Success of the system

In 1985 there were already one million devices in operation in France. The Minitel system was so successful that its 1996 revenues exceeded that of the US Internet that year. At times, the system generated sales of more than one billion euros a year. The Minitel peaked in 2000, when around 25 million French people used almost nine million devices.

With the development of the Internet in the USA, the end of the French system was heralded. A newer generation of Minitel terminals could, for. B. can also receive pictures in JPEG format , but the mostly simple text messages could not withstand the information transmission possible on the Internet. The Minitel remained a closed French system with no networking with users in other countries. Some Minitel applications eventually worked over the Internet. The newspaper Liberation made a test hours before the shutdown on June 30, 2012 and called the erotic teletext service 3615 Ulla via Minitel . Of the approximately 300 users of the service, not a single one was sitting in front of a Minitel terminal; instead, all of them used the online version via the Internet. Minitel's decline came very slowly. Many French people did not want to part with Minitel, which is why the Internet initially caught on more slowly in France than elsewhere. In 2010 there were still about two million Minitel users. 2,400 Minitel services were still active at the time (up to 25,000 in the 1990s). At the time of the shutdown on June 30, 2012, only 400,000 households had a terminal and 1,800 services were still active.

The decline in service providers and users ultimately made the system unprofitable for the last operator, Orange , given the maintenance costs for the network and the cost of replacement parts for the terminals. The individual parts of the remaining devices are to be reworked into car bumpers or coat holders. A company located near Toulouse has specialized in cannibalizing the devices and then reusing the plastic parts. On the day it was shut down, Minitel, once beloved by the French, was given a dignified farewell: newspaper articles paid tribute to the pioneer of the electronic age and traced its importance, for example under the title “Le 3615 ne répond plus” ); In Monaco, according to the free newspaper “20 minutes”, an artist presented Minitel devices that he himself had artistically alienated.

The service was introduced in 1988 by Telecom Éireann in Ireland . The technology was completely taken over from France and only slightly adapted (use of the QWERTY layout ). The service was linked to that of France and most of the services were available in both countries.

Minitel was a centrally controlled and not a free network from which the approved service providers and the network operator could make money. Günter Hack from News.ORF.at comments on the idea behind Minitel as follows: “(...) Apple's success with the App Store (has) given the idea of ​​a closed system with built-in payment options a boost. Even if Minitel has lost out to the sheer dynamism of the free network and its open standards - the idea of ​​a consumer-oriented network with simple clients connected to a strictly controlled headquarters still has numerous friends in the media and IT industry . After all, what is Facebook but a kind of mini-title that has made its way onto the Internet ”.