X.25 is a protocol family standardized by the ITU-T for large-scale computer networks ( WANs ) over the telephone network . The standard defines the physical layer, the data link layer and the network layer (layers 1 to 3) of the OSI model . International X.25 as is packet switching network ( packet switched network) sold, mostly from telephone companies. The product name for both Deutsche Telekom and Austrian Telekom is Datex-P . 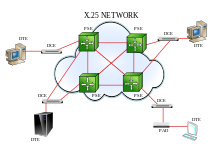 X.25 was started as a research project in the British National Physical Laboratory under the direction of Donald Watts Davies , who developed the concepts of packet-switched networks. A test network was set up in the late 1960s, and around 1974 a number of sites were connected to the SERCnet (Science Engineering Research Council Network). After a large number of updates and additions were incorporated into the system, a series of technical books was finally published as a description. The differently colored covers of these books made these descriptions known as "Colored Book protocols" and represented the first draft of what eventually became the X.25 standard.

SERCnet grew later and was reorganized as JANET in 1984 , which still exists today, but now as a TCP / IP network.

The general concept of X.25 was to create a packet-switching network on the then unreliable analog telephone network. Much of the X.25 system is a description of strict error correction , a technique called LAPB . The X.25 model is based on that the entire network remained internally at the telephone companies with data terminal equipment ( "Data Terminal Equipment" DTE) as an end point at the user.

X.25 was developed in the time of the "stupid terminals" that were connected to individual central computers. A direct access from one point to many others as with TCP / IP was not intended. Even the fact that X.25 was a network was largely hidden from users, for whom it essentially looked like a fault-free modem connection .

As a result, X.25 has the properties of a circuit-switched network, although the data is internally packet-switched. Connected computers are described with a kind of telephone number in X.121 address format - the Network User Address (NUA). The NUA consists of a three-digit country code , a one-digit provider code and the ten-digit National Terminal Number . Worth mentioning is the single-digit provider code, which only allows ten providers in a country - at that time that was considered sufficient. However, there were soon more than ten X.25 services in the USA - the country code was shortened by one digit to the number "31" in order to expand the provider code to two digits and allow up to 100 systems.

For a long time, X.25 was used as a kind of dedicated line between computers for permanent connections ( PVC for Permanent Virtual Circuit - permanent virtual connection). This was common for applications such as banking, where remote branch offices were connected to a central computer - usually cheaper than a permanent telephone connection. X.25 was usually billed with a flat monthly fee and an additional price per data package. Typical speeds were 4,800, 9,600 and 19,200 bit / s.

A number of publicly accessible X.25 networks ( CompuServe , Tymnet, Euronet) were set up in the 1970s and 1980s in order to reduce the cost of accessing the various online services. The user had to first interact with the network interface in order to start the connection. This type of connection is called SVC for switched virtual circuit (such as virtual dial-up connection ) or PDN for public data networks (public data network). This use of X.25 was not widespread and almost disappeared when long distance dialing prices dropped sharply in the 1990s.

At the time when it appeared that X.25 would become the only universal network system, a number of methods were developed for directly accessing the underlying packets. Many of these methods were "private" applications, but an X.400 e-mail method was also based on X.25 as the transmission layer .

With the availability of modems with high data transmission rates and built-in error correction procedures, it became easier to use the switching technology of the normal telephone network, and it was no longer worthwhile for many users to keep the network infrastructure consisting of special X.25 switching centers available . The result was Frame Relay , essentially X.25 with minimal error correction (6 bytes per packet) and a higher data throughput. Nevertheless, X.25 was still in operation for a long time in security-critical applications and in authorities.

X.25 networks are still in use around the world, but their usage is falling dramatically. They are largely being replaced by newer two-tier technologies such as Frame Relay, ISDN , ATM , POS or, above all, by the ubiquitous Internet protocol family . However, they remain in many parts of the developing world as the cheapest and most reliable connection to the Internet. X.25 has also been in use at Deutsche Bahn - since the 1980s - for the transmission of hazard reports within the MAS90 and DBMAS signaling system .