The title of this article is ambiguous. Further meanings are listed under Brome (disambiguation) .
Template: Infobox municipality in Germany / maintenance / stains

Brome is a town in the Gifhorn district in Lower Saxony . It is a member parish and the seat of the joint parish of Brome .

The patch of Brome lies directly on the state border with Saxony-Anhalt and protrudes into its area like a ram's spur . Brome belongs together with the communities Bergfeld , Ehra-Lessien , Parsau , Rühren , Tiddische and Tülau to the combined community Brome . The ear flows through the place . Immediately to the northwest lies Altendorf, two kilometers north of Wendischbrome , which belongs to the Saxony-Anhalt community of Jübar . After Steimke , which is part of the town of Klötze , it is two kilometers to the southeast, to Zicherie in the south about three kilometers. Voitze is about four kilometers to the west. With the exception of the Ohretal, the land is slightly wavy and characterized by arable land, green spaces and forests. The area around Brome is known as “Bromer Land”.

The five hamlets of the patch are

Merian copper engraving by Brome 1654; on the left the place with the church tower, on the right the castle

The first Brome Castle in the Ohre lowlands is obviously a Wendish foundation, probably from the 10th century. In 1170 Brome was first mentioned indirectly as the name Theodoricus Brumes (Dietrich von Brome). At that time Brome belonged to the Diocese of Halberstadt . In 1203 the place Brome was mentioned for the first time in the "Treaty of Paderborn", in which the son of Henry the Lion , Count Palatine Heinrich , confirmed the property to his brother Wilhelm . Brome has two settlement centers, the castle and the Bleek, the area of ​​today's main street west of the castle. The medieval local history, in which the castle and place were passed back and forth between different rulers, was restless and changeful. As early as 1219, the town's castle was destroyed in a conflict between the Guelphs and the Archbishop of Magdeburg . In 1292 Brome fell to the Margrave of Brandenburg , but returned to the Guelph branch due to his childlessness. Around 1300 there was another destruction of the castle. In 1360 the owner of the place, Duke Magnus von Braunschweig , pledged the castle and place to von Bartensleben . In 1428 Brome and the castle fell to the Principality of Lüneburg . In 1492 Fritz VI took over. von der Schulenburg the fiefdom . In 1527 Brome became Lutheran. Fritz VII von der Schulenburg had to cede the castle to von dem Knesebeck in 1548 . They gave the castle back to von Bartensleben in 1583. In 1586 a rectory was built in Brome; it had previously been at the St. Pankratius Church in neighboring Altendorf.

During the Thirty Years' War eight of 29 farms were destroyed by Tilly's troops . In 1742 Brome went again to the von der Schulenburgs. In 1807 a large part of the village with the church and school burned down. In 1811 Brome was a market town. In 1842 a new church was consecrated. 43 Bromer men died in the First World War and 91 in the Second World War.

After the Second World War, the inner-German border in the east of the area was gradually expanded. At first it could be crossed in some places without great risk. However, the patch was finally cut off from its eastern hinterland until November 18, 1989, when the border on the road to Mellin was opened.

In 1909 the Wittingen – Oebisfelde railway line was opened, with Brome as the largest town between the endpoints. The station was initially far west of the village, but Brome grew in this direction, so that the new town limit was west of the station. In 1974 scheduled passenger traffic on the Wittingen – Brome – Ränen section was discontinued. Museum trains ran from Wittingen to Brome for the Bromer Castle Festival until around 2000. In 2004 freight traffic was also stopped. The rails and the station building are still in place in 2011.

In 1934 an outdoor pool was built near the Ohre . In 1964, 1972 and 1980 it was renewed, expanded or supplemented by heating and is the only swimming pool in the municipality. In 1979 the Ohresee was built as a local recreation area. It consists of two 4.8 hectare lakes. In 1984 the nature reserve "Ohreaue bei Altendorf" was established immediately upstream, which was expanded to the nature reserve " Ohreaue bei Altendorf und Brome " at the beginning of 2017, including additional areas . From 1939 to 2000 there was a cinema in Brome, the Bromer Lichtspiele .

With the patch of Brome, the former communities Altendorf, Benitz, Voitze , Wiswedel and Zicherie formed the first integrated community of Brome on July 1, 1965 . On March 1, 1974, it dissolved and was re-established as the Samtgemeinde Brome on March 15, 1974, expanded to include the former Samtgemeinde Ränen .

Brome Castle was first mentioned in a document in the inheritance contract of Henry the Lion in 1203. Like the place, the castle also belonged to the noble families of those von Bartensleben, those von der Schulenburg and those von dem Knesebeck at different times. She served in its history as a defense, court site, home of the bailiff and as a commercial building. Since 1979, the castle has been used as a local history museum with an extensive display of rural self-sufficiency and old crafts (including blacksmith, shoemaker, turner and carpenter) in the Bromer Land. The castle festival in August, which took place annually until 2010, attracted many visitors.

The district of Zicherie and the Böckwitz district of Klötzer in Saxony-Anhalt actually form a double village . After the Second World War, the inner German border separated the two villages and their residents. As a result, Zicherie and Böckwitz were seen in the Federal Republic of Germany as symbols of the inhumanity of the division.

On March 1, 1974, the communities Altendorf, Benitz, Wiswedel and Zicherie were incorporated.

The Council of the Fleckens Brome consists of 15 councilors, including the part-time mayor Gerhard Borchert (CDU). Since the local elections on September 11, 2016 , they are distributed as follows:

The description of the coat of arms reads: silver and red divided by tin cuts, below a blue-armored, striding, golden lion, above a growing red tower with a red hood.

Church of Our Lady in Brome

The Evangelical Lutheran parish of Brome-Tülau in Brome includes the Church of Our Lady on Hauptstrasse, which was built in 1842. Another evangelical institution in Brome is the Michaelis-Heim (nursing home), today it belongs to the Diakonie Wolfsburg. The first home on Schulstrasse from 1960 (today Pastor-Bammel-Haus ) was supplemented in 1986 by a new building on Robert-Koch-Strasse. The New Apostolic Church built in the 1970s on the corner of Wacholderweg / Am Fuchsbau was given up in 2005. The New Apostolic congregation Brome was affiliated to the congregation Wittingen. Another Protestant church is located in Altendorf , where the Evangelical Free Church Brome has its seat. The Catholic residents of Brome belong to the parish of St. Michael Wolfsburg with a branch church in nearby Parsau . 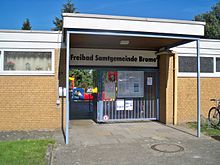 Entrance to the outdoor pool

Crafts and trade have been practiced in Brome for a long time. Agriculture plays a subordinate role. The place Brome is at the intersection of the federal highways B 248 (south-west-north-east direction) and B 244 (north-south direction). A state road leads to Steimke, a district road to Wendischbrome. In 2011, Brome is served by buses on VLG lines 160 (to Wolfsburg ), 163 ( Wittingen- Brome-Zicherie) and 164 (to Ehra-Lessien ). Additional lines operate during school hours.

There is a primary school in Brome .

On the third weekend in August, from 1980 to 2010, the “Castle Festival” took place at Brome Castle, which was attended by several thousand visitors. The beginning of the castle renovation in 2011 ended the history of this event.

Municipalities in the Gifhorn district