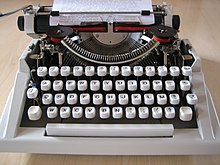 Typewriter without front cover. All type levers are arranged in a semicircle above the keys.

The type lever was the predominant technology in mechanical typewriters . Each button is connected to its individual type lever via a linkage, on which two characters ( types ) are usually mounted in a raised, mirror-inverted form. The type lever typewriter is based on a technology developed by John T. Underwood based on a patent from Franz Xaver Wagner in 1893 .

Electric type lever machines achieved only a small share of the market , in which the acceleration of each type lever activated was carried out by means of a rubber roller continuously rotating in the machine, driven by a motor.

Only the ball-head typewriter followed by IBM allowed a significant increase in the achievable writing speed, as the long levers were replaced by a small, light, spherical ring made of chrome-plated plastic. For the first time, it was possible for the user to exchange correspondence within a few seconds by exchanging ball heads. Here, too, a stop roller is quietly audible and the key travel is small, as it does not need to supply any energy to accelerate the types that hit the paper.

Electric typewriters with a type wheel allowed fast writing with lighter and smaller mechanics , which would constantly cover the place to be written on and therefore write line by line. The line that is constantly being created is typically displayed on an LCD dot matrix display and can be corrected before printing.

This technology already leads over with text memory, display and printing technology to computers with keyboard, screen, word processing and separate printer. 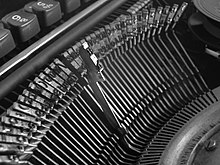 A type lever is moved. In the background you can see the angled types of the side type levers.

If the user hits a key with a finger sufficiently quickly and forcefully, he lets the associated type lever snap in the direction of the paper and open there. When the pressure is applied, the synchronously raised ribbon releases color to the clamped paper. The elastic rubber of the platen is pressed in a little and springs back elastically. If the finger has already released the button, the type lever bounces off again dampened by the ribbon, paper, hysteresis of the rubber and friction and, supported by a small return spring and more with the middle type levers , bounces back into its rubber-buffered rest position, also by gravity.

The type levers are stored roughly in a third of a circle in a slotted block with steel wire and arranged in a basket-shaped manner in front of the platen, so deep that there is a clear view of the writing area. The further a type lever is from the center, the more the sheet steel lever is bent at the transition to the free end. The type, which is guided laterally by a fork on its last centimeter, thus hits the point to be printed vertically.

With this vertical orientation it is possible, by holding down the shift key, to bring the second pressure element on the double type into tangential contact with the cylindrically curved writing area. In the case of small typewriters, this shift key is used to raise the carriage - by one character height -; in the case of larger typewriters with a thicker and longer cylinder, the type lever basket is often used. In the first case the capital letters are on top of the type, in the second case they are on the bottom.

To raise a stop on the paper, for example the "2" for square meters or the nth power , the paper had to be turned down one notch with the platen. Small portable typewriters usually did not have the small superscript numbers 2 and 3 as their own type, on Olivetti Dora or Hermes Baby there was no number "1" either, but could be typed with a small "l".

The double types are cast from bronze, have raised and reversed fronts, mostly the small and large versions of the same letter (e.g. h and H), their profile and are slit at the back and thus with soft solder - rarely by clamping - precisely on the free end their type lever mounted.

With a lever on the right or left of the keyboard, the ribbon could be set to RED or BLACK or WHITE. In the WHITE position, the type lever strikes without a color ribbon, which was ideal for writing on a wax matrix, as the wax could be squeezed out of it in places so that it could later be reproduced in a similar manner to screen printing. This position could also be used to produce a maximum number of copies with particularly thin copy paper.

In some typewriters the type levers had 3 characters of each type. There were then two additional positions of adjusted height.

If two buttons were pressed at the same time or only too close to one another, type levers could get caught. The view into the basket helps the clerk to avoid this. Lever jammed without force can be released individually with your fingers. You then fall back into your bed. If a type is hit hard on a writing position, the profile can be damaged. If a type lever is bent on the side of the foot so that it can no longer find its place in the rubber bed of the basket without touching a neighbor, it can be bent with feeling. Adjustment is more difficult if the type end of the lever is bent. Types that print incorrectly, be it due to a damaged profile or letter bellies that are only laid with fibers in this or bent type levers, allow specialists to assign writing to identified typewriters.

As a rule, the type lever consists of an angled arm and the separately attached / clamped type with the characters. Depending on the design, these types can also be exchanged, on the one hand for repair purposes (if a piece was broken off), but on the other hand also to replace individual characters with completely different ones, depending on the particular task. In the Third Reich, for example, type levers with the SS rune were manufactured for the SS typewriters. The replacement of individual characters was made much easier by the later appearing ball heads and type wheels . The costs for inserting a special character in a ball head, especially for one-offs, were very high.

The individual assemblies of a type lever typewriter are described in the article Typewriter .

Comparison with other type carrier systems

The system was extremely successful because, in contrast to competing systems, it enabled a standard keyboard and the keys could be struck with ten-finger spelling . The relatively simple mechanics could be produced inexpensively and with a solid quality. At the same time, even cheaper models were on the market that were awkwardly operated by a lever and a push button. Other devices like the Blickensderfer were expensive top models due to their highly integrated mechanics. The type lever models positioned themselves as a compromise between economy and writing comfort and in this respect were for a long time without any real alternative.

Type levers have the disadvantage that they easily get caught when typing quickly. Electric typewriters therefore mostly use ball heads or type wheels . Later, carbon ribbons made it possible to have a razor-sharp typeface and spherical heads or type wheels made it possible to change the typeface by simply exchanging the type carrier. These systems gradually replaced the type lever mechanism since the 1970s.

The position of the type lever in comparison to other type carrier systems is outlined in the article Typewriter .