The hamlet of Oberfahr (derived from the upper ferry ) is located a little to the south-east of the settlement center of Au. Originally it was a border station at the ferry that crossed the Rhine. The place Heerbrugg probably corresponds to that of the St. Gallen abbot Ulrich III around 1078 . built fortress Hêrburch . Heerbrugg, as the center of the Middle Rhine Valley , extends over the border of the political community of Au to Berneck , Balgach and Widnau . 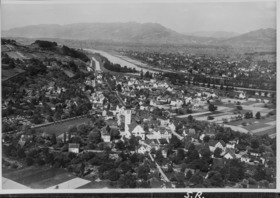 Called Diken Auwe in 1316 , Au emerged from the original settlements of Au Haslach, Hard and Monstein, at the narrow point between Heldsberg and the Rhine. Originally belonging to the Reichshof Lustenau and from 1395 under Hohenems rule , Au was under federal territory from 1490. These became their own lower court in 1593 as Hof Widnau-Haslach. In 1775 they separated into the Au, Widnau and Schmitter farms. The property in Lustenau , the "Schweizerried", was retained. 1766–76 the Counts of Harrach were given lower court over Au, 1782–98 those of Salis-Soglio . Until 1853 the latter also owned Monstein Castle. In 1803 the canton of St. Gallen was founded and Au remained united with the municipality of Berneck until 1805.

In 1721 a Catholic chapel was built in Au, which was later replaced by church buildings (1804 and 1925). A Catholic parish in Au was founded in 1802, which was the first replacement by Berneck. The connection to the Rorschach - Sargans railway network took place in 1858 with the two stations Au and Heerbrugg. A new industrial settlement then grew up in Heerbrugg , which Au shares with the communities of Balgach , Berneck and Widnau . Heerbrugg train station is on the ground of Au. At the end of the 19th century the embroidery industry flourished, with the result that between 1900 and 1910 the proportion of foreigners rose from 8.5% to 32.4%. Since 1952 there is a parish of the Reformed Church in Au .

Paul Grüninger was a Swiss teacher, Swiss champion as a football player and from 1919 police captain in St. Gallen . He married Alice Federer, who came from a respected merchant family from Au. The St. Gallen police commander, Hauptmann Grüninger, saved several hundred Jewish and other refugees from Nazi persecution and extermination in the years 1938–39. In 1939 he was suspended from service and his pension claims were denied . He had to give up his official apartment. Since October 29, 2005, a plaque has been reminding us of the years (1955–72) when the Grüninger couple rented an inexpensive three-room apartment in Au, at Kirchweg 4. In 1993 he was politically rehabilitated and has since been honored several times posthumously. He was buried in Au SG in the local cemetery

On September 19, 1988, immediately after the exit signal from the station, eight tank wagons loaded with kerosene derailed from a freight train traveling in the direction of St. Margrethen . Part of the kerosene caught fire and a large amount spilled into the inland canal and drifted down the canal while burning. The cause of the derailment was the broken hub of an overheated wagon wheel. 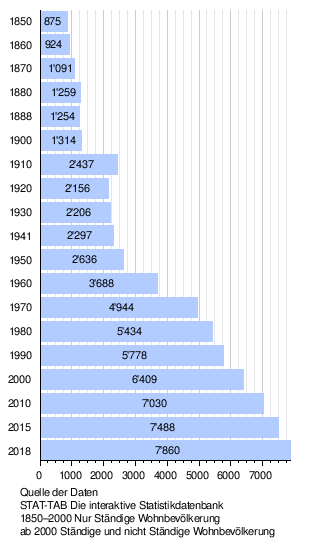 Political communities in the Rheintal constituency