Lütisburg is a municipality and a village in Toggenburg in the Swiss canton of St. Gallen . Lütisburg is located at the confluence of the Necker and Thur rivers .

The municipality of Lütisburg consists of the village of the same name, which sits enthroned on a rocky ridge at the confluence of the Thur and Necker rivers, the village of Lütisburg Station , the hamlet of Tufertschwil , which is located above a prominent molasse wall , and the hamlets of Ober- and Unterrindal, Winzenberg, Rimensberg, Grünhügel, Gonzenbach, Schauenberg, Haslen, Dottenwil, Altegg, Wildenhof, Herrensberg and Chrummentürli. While the village of Lütisburg is on the right side of the Thur after the mouth of the Necker, the Lütisburg train station is about two kilometers up the valley on the left side of the Thursday. The Kinderdörfli St. Iddaheim, a special school for children with behavioral and learning disorders, is located in Lütisburg Station.

Lütisburg Castle on an engraving from around 1700 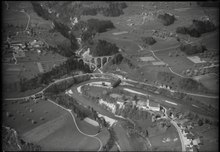 Aerial photo by Werner Friedli from 1949

While Unterrindal was mentioned for the first time in 849 and Tufertschwil in 928, the name of the Lütisburg on which the place is based did not appear as Liutinsburch until 1214 , presumably by Liuto , the descendant of a Count of Toggenburg .

The castle of the ministerial Liuto, built in 1078 by the St. Gallen monastery, was abandoned by the monastery a short time later. Due to its strategically important location, it was the headquarters of the Counts of Toggenburg from the 13th to 15th centuries . After the prince abbey of St. Gallen acquired the county of Toggenburg in 1468, the castle served as the bailiff's seat . The serfs were assigned to the court of Bazenheid . In 1803 the political community of Lütisburg was created, which belonged to the Alttoggenburg district from 1831 to 2002 .

A folk priest is documented for the first time in 1214 , a church in 1275 and the medieval St. Bartholomew Chapel in Tufertschwil , which was remodeled in 1891, in 1529 . After the Reformation in 1528, a simultaneous relationship existed from 1537 to 1935 . The Reformed minority was looked after from Kirchberg from 1559 to 1856 , the Catholic majority from Bütschwil and until 1691 from Ganterschwil . In 1810/11 the parity , now Catholic, parish church of St. Michael was built from stones from the nearby castle, in whose side wing the Catholic school was set up. In 1935 a reformed church was built, in 2007 a large sports facility.

The former denominationally separate schools have been united since 1970. In 1877 the catholic orphanage , today Kinderdörfli St. Iddaheim, was founded in Altgonzenbach. In the 19th century, agriculture was dominated by industry (iron works, copper hammers) and manufacturing companies. The first and second economic sectors were also strongest in the 20th century . A train station on the Wil – Ebnat line has existed since 1870 .

Guggenlochbrücke with a train of the S9

In Lütisburg Station, the community has a stop on the S9 Wil – Wattwil , which runs every half hour . The village Lütisburg is with the also trains running every half hour post bus with Bütschwil connected in addition to and in rush hours with Flawil.

By the municipality of the 60-kilometer running Thurweg , a along the Thur leading trail of Wil by Wild house . 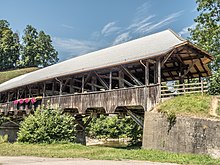 Lütisburg's townscape is characterized by bridges and footbridges, including the Letzibrücke (1853, 1969), the Guggenloch railway viaduct (1870, 1945) and the new Thurbrücke (1997). The covered wooden bridge over the Thur on the cantonal road to Flawil from 1790 was used for car traffic until 1997. The hiking trail to Ganterschwil crosses the Necker on the wooden Letzi bridge built in 1853 .

The hamlet of Winzenberg with the Winzenberger Höhe (836 m above sea level ) is a popular excursion destination.

In Tufertschwil which found 2,005 annually OpenAir Tufertschwil with some renowned performers instead. Because the festival caused intense damage to the fields after continuous rain in 2005, it was held in 2006 and 2007 in the community of Jonschwil .

Political communities in the Toggenburg constituency