The constituency of Wil is a sub-unit of the canton of St. Gallen in Switzerland , which was formed under the new cantonal constitution of June 10, 2001. It consists of the two former districts of Wil and Untertoggenburg (excluding Ganterschwil and Mogelsberg , which came to the Toggenburg constituency ).

The court in Wil, where the prince abbots of St. Gallen often stayed in the past . Today Wil would like to take on a central function, but Degersheim and Flawil are far away and the neighboring Hinterthurgau belongs to the neighboring canton.

The communities in the constituency of Wil are politically close. The largest party is the Swiss People's Party (SVP). It reached exactly 30 percent of the vote in 2016, but has lost four years later. It has replaced the CVP as the strongest party. CVP, FDP and SP move around 15 to 20 percent. The Greens achieve shares over 5 percent. The city of Wil does not give a left politically like the canton capital.

For Degersheim and Flawil , membership of the Wil constituency, although they are oriented towards St. Gallen , has advantages, because they would have little weight in the St. Gallen constituency . 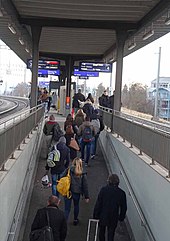 Uzwil train station. Many residents of the constituency commute to work in Zurich, Winterthur or St. Gallen.

In the Wil region - which also includes Hinterthurgau - the cantons are insignificant in everyday life for culture and economy. Although the Wil region is part of the Zurich metropolitan region, it has also signed the Lake Constance Metropolitan Area Charter . The Wil West project, however, is not making any headway. Between Münchwilen , Sirnach and Wil, 2000 to 3000 jobs are to be created in the next few years.

The most important employer is Bühler in Uzwil , but Benninger (Uzwil), Stihl (Wil) and Maestrani (Flawil) also take care of commuters. Both in the city of Wil and in the rural communities, clubs play a major role. With the FDP politician Karin Keller-Sutter , Wil is a member of the Federal Council .

Since January 1, 2013, the constituency of Wil has included the following municipalities:

Changes in the community since 2003

Constituencies of the Canton of St. Gallen

Political communities in the constituency of Wil

Cultural assets in the constituency of Wil

List of cultural assets in the canton of St. Gallen