Under Maritime fire fighting means all fire-fighting measures on the high sea , usually in fires on ships or oil rigs . It is part of ship safety and cannot be compared with fire fighting on land, as it faces completely different problems. 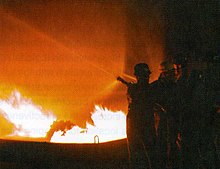 Exercise: fire fighting in the ship

A fire at sea can occur on a ship or an oil rig, for example. A fire there is completely different from a fire on land. He heats the steel walls of the watercraft so much that the fire can expand through heat conduction . The walls have hardly any fire-retardant effect, mostly on the contrary: The hot steel ignites inflammable materials in other areas as well. In addition, the long corridors, many stairwells and ventilation shafts create a strong chimney effect that allows the fire and smoke to spread quickly. In addition, watercraft often have a lot of flammable materials, such as wood or plastics, which quickly catch fire and generate a lot of breath poisons , which makes it essential to rescue people quickly. In addition, a watercraft is a very complex structure, which combines machine rooms, living rooms, restaurants, workshops, kitchens and much more in a relatively small space. Each of these sub-areas harbors specific fire risks that have to be considered together at sea and not separately, as on land.

Rescuing people has the highest priority, especially at sea, as people here normally cannot get themselves to safety. However, it is much more difficult at sea, as rescue workers usually have a very long approach / approach route. In addition, corridors in ships are particularly long and branched out. They smoke too quickly, with visibility often dropping below 30 cm before the smoke enters the cabins. Thus, the corridors become a dangerous labyrinth in which one can get lost very quickly.

That is why emergency exits must be marked on passenger ships. In addition, a system is being developed that uses acoustic signals that cover the entire audible sound spectrum to indicate the route to the emergency exits. Since the time factor plays a decisive role, specially trained rescue teams are flown in by helicopter if possible , and they are solely responsible for rescuing people.

The rescue cruiser Vormann Jantzen during a fire fighting exercise

The actual fire fighting often takes place at sea with an enormous amount of water through large monitors to put out the fire or at least to cool the ship down. In the case of smaller fires, a massive internal attack is often carried out using extinguishing equipment . Too much water must not be pumped into the interior of the ship, otherwise the ship could list and overturn . Backfires are also a particular danger at sea , as many parts of a ship become very hot in a fire and are poorly supplied with cooling fresh air.

Multipurpose ships from rescue organizations (such as the rescue cruisers of the DGzRS ) or from seafaring authorities (in Germany customs , WSV and federal police ) are often used for fire-fighting measures . Smaller fireboats are also used near the coast .

Due to the particular difficulty of fighting fires at sea and the risk of high casualties in the event of a disaster , special attention is paid to fire protection at sea. Thus, fire walls with bulkheads that are closed to limit the fire, now rule. However, these bulkheads can also only delimit the primary fire locally; the occurrence of secondary fires due to heat conduction is not prevented. Larger passenger ships have a ship fire brigade that uses the existing extinguishing equipment ( fire extinguishers , wall hydrants , water cannons ) and can carry out an initial attack. Sprinkler systems , vapor barriers and similar measures as on land are becoming more and more popular and are partly prescribed by the IMO SOLAS guidelines.