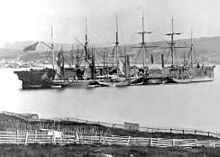 The Great Eastern was a 211 meter long steel sailing steamer with a combined paddle wheel, screw and sail drive with six masts. Until 1901 it was by far the largest ship in the world ever built and decades ahead of its time. It was designed by the English engineer Isambard Kingdom Brunel (1806-1859). It had a capacity of 4000  passengers . The Great Eastern became important for laying the first functional transatlantic cable (1866). 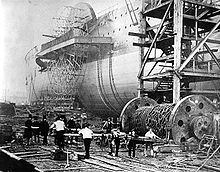 A few weeks before it was launched, 1858

View of the Great Eastern

The ship was built in collaboration with the experienced designer John Scott Russell , who, without Brunel knowing, was in financial difficulties. There was a dispute between the two, and Brunel accused Russell before the board of the financiers of selling tons of steel to pay off various debts. A little later, work on the ship had to be suspended.

The banks took over the shipyard and the ship and had it continued to be built under the direction of Brunel. The shipyard Messrs Scott, Russell & Co. ( Millwall , Isle of Dogs east London) belonged to John Russell.

The launch on November 3, 1857 took place with great public attention, but was a disaster because of technical problems and the breaking of a chain. A worker died in the process. The ship was accidentally baptized with water instead of champagne . The ship, initially baptized with the name Leviathan , only moved a meter. Only weeks later, on January 31, 1858, it was possible to bring the ship into the water with the help of the tide and the use of hydraulic pumps. The cost of the unsuccessful launch was £ 120,000  .

After a series of accidents in advance (including a major fire), which were attributed to the cursed naming of the ship after the biblical sea monster Leviathan , it was given its final name Great Eastern . Client Brunel suffered a stroke the day before the ship's maiden voyage , from which he did not recover. He died a few days later at the age of 53.

12,000 workers, including children, were involved in the construction.

The hull was made entirely of iron and the hull was double-walled (0.85 m apart). The drive took place via two side paddle wheels and a stern propeller ; the wheels had a diameter of 17 m, the screw 7.3 m. The propulsion system consisted of two steam engines with a total of 8300 HP and ten boilers - four for the paddle wheels and six for the propeller - and gave the ship a speed of 12½ knots. One machine with 4900 HP was intended for the screw drive, the other with 3400 HP for the paddle wheels. The ship had five funnels.

There was also the option of sailing under sails. In addition, the ship had six masts, the second, third and later also the fourth for a time, three square sails , the other gaff sails (with a total sail area of 5,450 m²). According to some sources, the ship had only 1,686 m² (18,148  square feet ) of sail area, a realistic figure: In all the pictures of the ship with the sails in place, she drove a main gaff sail on all masts, max. nine square sails (often only four), a large foresail (rarely two), no staysails, rarely topsails (except for the square sails). Since there was a lack of nautical technical terms for such a large number of masts, the names of the days of the week from Monday ( foremast ) to Saturday ( mizzenmast ) were assigned to the six masts . Nevertheless, there was an attempt to name the masts in a classic way: fore mast (fore), rear foremast (after-fore, forcastle), main mast (main), second main mast (second main), cross mast (mizzen), mizzen mast (spanker).

The Great Eastern had space for around 4,000 passengers and had such a large loading capacity for coal (around 15,000 t) that it would have been possible to circumnavigate the world. It was 50 years ahead of its time. Since there was no need for this passenger capacity in her time, none of her trips were profitable. In addition, accidents repeatedly impaired the reputation of the ship: on the maiden voyage in September 1859, a steam boiler exploded , several people were killed. In January 1860 the captain, William Harrison, died when he overturned in a storm with a dinghy of the Great Eastern in the port of Southampton. On the first Atlantic crossing, only 35 passages were booked for fear of accidents.

In September 1861 a shaft tore off both paddle wheels. On August 27, 1862, the ship ran into an unmapped reef off Long Island, New York. The crack in the outer skin of the ship was almost 30 meters long. Thanks to the double wall, the Great Eastern was able to enter New York Harbor on its own. In 1867, again a passenger ship, a windlass burst in a storm and four sailors were impaled.

After being used as a cable layman (see below), the Great Eastern was laid up rustling in Milford Haven for around twelve years, as there were now more suitable and more profitable cable laying vessels , until it was auctioned again in October 1885 and chartered by D. Lewis in 1886 , (worldwide) served as a floating exhibition ("Lewis's Exhibition"). The new owner earned more with the tickets than the predecessors with passengers.

Use as a cable layer 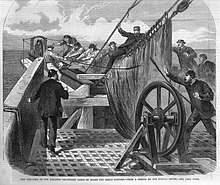 Contemporary illustration of the cable break from The Illustrated London News

After a few passenger trips and several accidents, the Great Eastern was sold for £ 25,000 (construction price: £ 500,000) and converted into a cable lay. The Great Eastern was the only ship that was able to take the gigantic cable. The fourth chimney and part of the boiler were removed for this purpose. It took five months to load the cable alone. The Great Eastern laid 4,200 kilometers of the transatlantic cable from 1865 . After a few incidents (rupture and loss of the cable), this submarine cable was successfully put into operation by the Atlantic Telegraph Company as the first of its kind in July 1866 . The laying of the submarine cable was recognized by the Austrian writer Stefan Zweig in his book " Sternstunden der Menschheit ". These cables made it possible for the first time to exchange telegrams between America and Europe using Morse code in real time - radios were only developed 40 years later. In addition, the ship laid a submarine cable from Suez to Bombay .

The Great Eastern stranded for demolition

Auctioned again at a profit for the first time in 1886, it was towed to Greenock until the final demolition sale , then to Dublin and then back to Greenock. In August 1888 the ship was again sold on demolition for £ 16,000 and brought to Liverpool . The scrapping began in January 1889 and lasted about 18 months. Rumors that the skeletons of two workers were found in the double wall when it was demolished belong in the realm of horror tales - at least there is no evidence of their historicity.

In 1906 a stern of the ship was erected as a flagpole in Anfield , the stadium of Liverpool FC .

In 1867 the Great Eastern made a voyage from Liverpool to New York . The most prominent passengers were the French writer Jules Verne and his brother Paul Verne . Inspired by this trip, Jules Verne wrote his novel Une ville flottante (Eng. A floating city ) , published in 1870 .

The singer Sting takes up the legend of the two workers lost in the double hull in his Ballad of the Great Eastern on the album The Last Ship .

In 2003 the BBC filmed the first part about the Great Eastern in the series Seven Wonders of the Industrial World .