Log is a redirect to this article. For the German historian, see Thorsten Logge .

A log (also Logge ; from English log = (original) log) is a measuring device in nautical navigation to determine the journey , the speed of watercraft . It shows the distance covered in the water (see Driving through the water ).

The original measuring method consisted of throwing a wooden board with a lead weight - the log - in the form of a quarter-circle cut-out attached to a line into the water from a moving ship: the wood remains in almost the same place in the water. After a certain time (which was previously determined with an hourglass , the log glass ), the length of the expired log line is determined, then the entire arrangement is pulled back on board. If you put the distance covered by the ship in relation to the time required, the speed of the ship in the water can be calculated.

The calculated speed used to be required together with the displayed compass heading to determine the position of watercraft. The determination of the position based on the addition of individual sections of the route measured by log and time and compass is called "coupling" or coupling navigation . Dead Reckoning , called.

A log can usually only determine the relative speed to the surrounding water ( travel through the water ). In order to determine the absolute speed of a ship, it was therefore previously necessary to rely on (measured and) empirical values ​​of the respective river or ocean currents . Today's methods using radio and satellite navigation result in much more precise location determinations, so that measurements with the log are usually only of informative character or provide information about the water currents by means of the difference to the values ​​from satellite navigation. 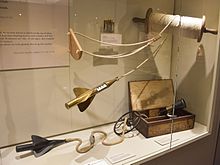 Stages of development of the log, exhibited in the maritime museum Hamburg ; Above: hand log with triangular log and log line on reel; Middle: Patent log with counter in the propeller; Below: Patent log with display instrument at the end of the line (in the box) - this allows the speed and the distance covered to be read without having to retrieve the log 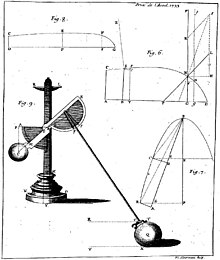 The rail log is a simple way of determining the ship's speed.

To measure, mark the longest possible route along the railing in meridians and stop the time it takes for a floating piece to be thrown overboard to travel this route. Example: the route 18 meridians, covered in 6 seconds, results in a speed of 3.00 kn.

At the end of the 16th century , probably in Holland , the log was developed, from which the name "knot" for the ship's speed comes: a triangular wooden board (the log) that is held vertically in the water by a lead weight attached to one side . The log line , which was attached to the three corners of a cockpit and marked by knots , was let loose from a spindle, stopped with an hourglass (log glass) and the knots counted. The inaccuracy was less than +/- 10 percent. The two bottom rope of the bridle dissolve under high train in obtaining a leash, whereby the required for the function of the log, but omitted extremely cumbersome high flow resistance in obtaining.

The patent log has an impeller that hangs on a flexible shaft. Its rotation is indicated by a counter at the stern of the ship as a nautical mile traveled or (in later versions, more or less as a rev counter) as a speed. Edward Massey patented his patent log with a tour counter in 1802. In 1851, Thomas Ferdinand Walker built devices based on the same principle, but they were calibrated in miles. His Walker company was the best known manufacturer of such devices until the middle of the 20th century. The name Sumlog , also known for this type of log, is actually the brand name of the first device that was able to transmit the rotary motion of the impeller to the cockpit via a flexible shaft.

An electrolog (also induction log) is a measuring device for determining the speed and the distance traveled by a ship based on an electrodynamic measuring principle. The electrolog sensor consists of a small paddle wheel, which is flown against by the water, rotates and generates voltage pulses in electronics (usually a Hall sensor ) that are proportional to the speed through small magnets in the wings . The voltages are fed via amplifier and transducer to a display device that shows the speed and can also display the distance covered by integration over time. This measurement method is the one commonly used today for small ships. It also works at very low boat speeds.

Electronic logging works with ultrasound , which is emitted diagonally ahead and reflected from the sea ​​floor or from air bubbles in the water. Another, special, principle uses the electrical conductivity of salt water . To do this, an electromagnetic field is generated that changes in line with the speed.

The hydrostatic logs in turn measure the back pressure of the water against the moving ship and correspond to the pitot tube of the aircraft. The measuring range for ships is between 2 and about 50 knots. The dynamic pressure is directly proportional to the speed of the ship. The revolutions of the propeller also give an acceptable measure for the speed if they are corrected for the draft , swell, algae , etc. This calibration on a known test route - for example between two beacons in a fairway - is called "running miles ".

The sonar Doppler logs send out underwater sound signals . When the sound wave arrives on the sea floor, it is reflected there and then returns to the logger's transmitter / receiver. The sea floor does not move, but the ship's own movement still produces a Doppler effect that can be evaluated in the device.

As long as the sound waves are still reaching the sea floor and back, the sonar Doppler logs measure the movement over the ground . However, if it is no longer possible to use the seabed as a reference, the device uses suspended particles (plankton, minerals, dirt, etc.) in the water to measure the movement through the water based on the reflections and the resulting frequency shift.

In any case, logging provides the " journey through the water " (more precisely: through the surrounding medium). In order to use log values ​​in nautical science, they may have to be corrected - as described above - due to external circumstances, especially the influence of a possible current and drift . These currents can falsify the distances and directions covered, but they are

Nowadays the easiest way to determine the current and drift is by comparing the log with other navigation methods (e.g. GPS ), with which the exact " travel over ground " can be determined. With strong currents, there can be considerable differences between the ride through the water and the ride over the ground, which can go so far that the course over the ground points in the opposite direction to the adjacent compass course. In this case, the log still shows a forward speed, even though the ship is actually going backwards. In addition to a considerable loss of time, this can also lead to stranding if the situation is not recognized in time.