from Wikipedia, the free encyclopedia
This is the spotted version , flagged on March 31, 2020 . There is 1 pending change that has yet to be viewed. 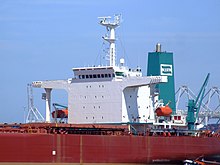 Deckhouse of a modern bulk carrier

As a coach roof is any on the ship's deck jutting structures. These include first the deckhouse to the bridge , but also masts , cranes and other loading and unloading equipment, but not the charge (z. B. Container ). They are usually divided into superstructures, the sides of which are formed by the outer skin of the hull, and deckhouses, which are surrounded by walls but do not extend to the outer skin. In the case of military ships, armament is also part of the superstructure. The deck superstructures are part of the design of the ship and are integrated or placed on the ship's deck after the hull has been completed. Deck superstructures are sometimes greatly changed or even removed during conversions, which may give the ship a completely different appearance. The deckhouses of nuclear-powered aircraft carriers are also known as islands due to their small footprint.

A deck structure in the middle of the ship is most comfortable for the crew : this is where the ship's movements are felt least. In addition, there is less disturbance from noise and vibrations if the engine room is not directly below the deck structure.