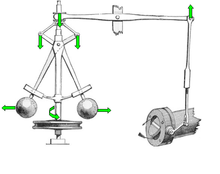 The centrifugal governor , already known from mill construction , was introduced into general mechanical engineering by James Watt in 1788 . James Watt used the governor to keep the working speed constant of the steam engine he had improved . The dimensioning (dynamics of the transient response , tendency to oscillation and control characteristics) of the centrifugal governor for this task was the hour of birth of modern, mathematical control technology .

Weight as a counterforce

The early design for regulating steam engines was driven by a belt , it used weight as a restoring force. At rest, the throttle valve of the steam line to the steam engine is fully open. When the piston of the steam engine moves, the governor begins to turn. As a result of this rotation, the two weights (e.g. made of cast iron ) are pulled upwards and outwards against the force of gravity by centrifugal force . A joint and lever mechanism (see toggle lever ) actuates a throttle valve in the steam line of the machine, which reduces the supply of steam to the machine. The machine then runs more slowly until a stable state or a constant speed is achieved. This arrangement is an example of a control loop with negative feedback (the faster the machine runs, the less steam is made available to it). The problem with the construction is the drive belt: Is there no transmission of the speed signal from the shaft to the controller, e.g. B. by a broken drive belt, the controller opens the steam supply completely. The steam engine runs at maximum speed until it is either switched off in an emergency or destroys itself.

Spring as a counterforce

In order to achieve a position-independent function, springs were mostly used later as a restoring force.