They are used when an electrical current or voltage is too great to be measured directly with conventional devices. Inductive transducers enable the galvanic separation of the easily processable electrical signal from dangerously high voltage before it is fed to an ammeter , voltmeter , energy meter , measuring device for active power , etc.

As part of a measuring device, transducers must be designed for small error limits . 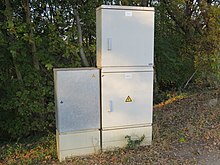 Measuring transducers for alternating quantities are primarily used in the power grid as stationary specially designed transformers , both in versions for measuring purposes and for protection purposes. They are dealt with under the keywords current transformers and voltage transformers . They are also available as laboratory devices as well as combined with a display measuring device called clip-on ammeters .

Current transformer for laboratory use with several measuring ranges

In medium-voltage switchgear in particular , so-called small - signal converters with Rogowski coils are increasingly being used, which instead of a current proportional to the input current output a voltage proportional to the input current derivative according to the time. Due to their small size, these are becoming more and more popular. However, they are not measuring transducers in the sense given above, but measuring transducers; they need electronic support - the output signal is only available after integration. 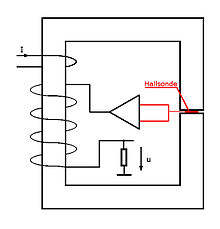 Scheme of a direct current converter with a Hall probe

Construction as a straight-through DC converter

The picture opposite shows a possible structure. It contains a magnetic circuit with two windings: One thick-wire with one or a few turns for the load current to be measured and a second thin-wire with a high number of turns for compensation . A magnetic field sensor sits in a small air gap. To this end, Hall probes or field plates used. The voltage from the sensor is fed to a control amplifier. Its output signal is switched to the measuring winding in such a way that it compensates the field of the load current to zero. In this circuit there is also a relatively low-resistance measuring resistor (load, e.g. 100 Ω) from which the load current image can be tapped. This measuring method can be used over a wide frequency range, but with direct current a hysteresis error interferes. The upper limit frequency is largely determined by the control amplifier and is typically in the 100 kHz range.

The setup uses a fluxgate magnetometer as the zero field sensor . The principle of controlling the field to zero by means of a control amplifier and auxiliary winding is also used as described above. The zero field sensor based on the fluxgate principle does not require a slotted core, has no hysteresis behavior and, according to the manufacturer, has a low zero point drift.

For very high-frequency alternating currents and microwaves, transducers with coils are unsuitable because of their inductivity , and thermal converters are often used . Because of their thermal inertia, they do not measure the instantaneous value of voltage or current, but rather generate a voltage that is proportional to the mean power consumed by the sensor, i.e. the square of the current.

There are also transducers that use optocouplers and can be used for both direct and alternating current, see Galvanic isolation .