Fluxgate magnetometer during archaeological prospecting work on the Wellie earthworks 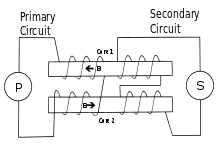 About the function of a fluxgate magnetometer: The source P magnetizes nuclei 1 and 2 by means of alternating current until they are saturated. The voltage induced at S cancels out only if no external horizontal magnetic field component disturbs the symmetry. 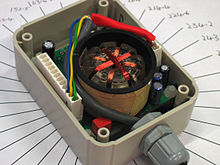 Opened magnetic compass with fluxgate magnetometer, consisting of a (concealed) toroidal core and the four visible sensor coils arranged around it

Two soft magnetic coil cores are periodically driven into saturation. The cores are wrapped in two opposing receiver coils, so that the induced voltages cancel each other out in both coils in the absence of a field. An external magnetic field component acts in parallel or anti-parallel on the fields of the two coils. As a result, when the external field is parallel to the field of a coil, the saturation of the core is reached earlier in the half-cycle in this coil. In the other coil, the external field is anti-parallel during this half-period, so that the core is saturated later. This asymmetry causes a resulting signal in the receiver coils that is proportional to the applied field. The induced voltage has twice the frequency of the exciter alternating voltage.

The structure can be modified in many ways, for example the magnetometer shown on the right works with a toroid, which is excited by means of an attached coil. The receiver coils surround the entire core and therefore the induced voltage will be canceled out in the absence of an external field. By determining the phase and magnitude of the voltage induced in all four coils, the magnitude and direction of the horizontal component of the external field can be determined.

Orthogonally arranged cores and measuring coils can also be used to determine the field vector in three-dimensional space.

In order to improve the linearity and enlarge the measuring range, a regulated direct current can be applied to the compensation coils located around the entire structure, so that the voltage induced in the sensor coil becomes zero. The current is then proportional to the external field and cancels it. The direct current is generated with a negative feedback and is therefore also the output signal of the sensor. Current sensors are also built in this way (see below).

The fluxgate probes are also used in measurement technology for non-destructive material testing :

The two cores are combined in an E-shape, and the two partial windings of the probe apply an alternating field to the material in front of it. If the material is homogeneous, both individual signals are of the same size and are canceled out because of their opposing directions. However, if the material z. B. a crack, there is a difference signal that can be detected with high sensitivity.

When the material is magnetized, cracks on the surface generate an outwardly penetrating stray field. The field can be recorded using a variety of methods. In addition to applying a magnetic tape, this also includes scanning with a magnetic probe.

The current measurement using the magnetic field generated by the current can take place with the aid of a fluxgate probe in a slot in the core surrounding the current conductor and zero compensation with a compensation coil on this core. Such current sensors are superior to other principles (e.g. measurement with a Hall probe ) with regard to offset errors (e.g. compensation current transformers from Vacuumschmelze).