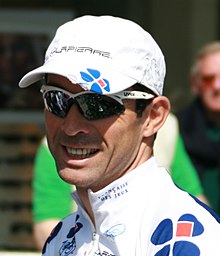 In 1988 he was able to celebrate his first major success by winning the national cross-country championship in the U23 class. In 1991 he won the Isle of Man International (also Manx Trophy) race, which was the most important international amateur race in Great Britain at the time.

Mengin turned pro quite late in 1994 at the age of 25 and only competed with smaller teams for the first three years. In 1997 he switched to La Française des Jeux , where he drove until 2008. In his first year with his new team, he won a stage in the Three Days of De Panne and was successful on the 16th stage of the 1997 Tour de France from Morzine to Friborg in Switzerland. Other successes of the French were victories at GP Ouest France-Plouay , Grand Prix Cholet-Pays de la Loire and a stage at Castilla y Leon . At the Tour de France 2005 he crashed on the 6th stage in Nancy as the leader in the last corner 400 m from the finish and had to give up two days later. After the end of the 2008 season, Mengin retired from his career.