This article deals with the Bronze Age settlement of Phaistos on Crete. For more meanings, see Phaistos (disambiguation) .

Phaistos or Phaestos ( Greek Φαιστός ( f. Sg. ), Festos ) is the name of a Bronze Age Minoan settlement on the Greek island of Crete . It was near the south coast of the central part of the island, on a ridge above the fertile Messara plain . The ruins of the Palace of Phaistos, located in today's Heraklion Prefecture , once formed the second largest Minoan palace in Crete after Knossos , covering an area of ​​8,400 m² . In the ancient Egyptian list of place names in the temple of Amenophis III. the place is attested with the new Egyptian name b3-y-š3-tj (= bajšata / bajstija ), in Mycenaean Greek the linear script B it was called pa-i-to .

At a distance of about two kilometers northwest of Phaistos there was another, smaller Minoan palace complex on a neighboring hill. This was named after a nearby Byzantine church Agia Triada , as the Minoan name has not been passed down. Both palaces were connected by a paved path. The ancient port of the settlement, Kommos , was about six kilometers southwest of the Palace of Phaistos on the Libyan Sea , north of today's Matala . Both the palaces and the port facilities have been partially excavated since 1900. The excavation sites can be visited, the palace complex for a fee.

It is assumed that the Messara plain and the Festos ridge (also known as Kastri ) dates back to the late Neolithic (Neolithic) around 4000 BC. Were settled. The oldest historical finds in the area date from the early Minoan period around 3000 BC. According to legend, the city of Phaistos was founded by King Minos and named after a son or grandson of Heracles ( Heros Phaistos ), who was killed by Idomeneus , the grandson of Minos and later King of Crete. The first ruler of Phaistos is said to have been Rhadamanthys , the brother of Minos. According to the ancient Greek poet Homer , the city took part in the Trojan War under King Idomeneus . Parts of the Neolithic and pre-palace settlement were discovered in deeper layers, such as a round hut from the Neolithic period under the southern section of the central courtyard of the palace of Phaistos. Around 3500 BC Phaistos lay on the sea bay of the Mires basin, after its landing process in the late Neolithic until around 3200 BC. BC still immediately southeast of the coast of the Timbaki Basin, into which the Geropotamos flowed into the sea at this point . By 2100 BC The bay was filled with alluvial sand up to the height of Agia Triada. 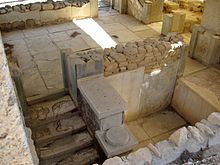 Interiors of the palace

With the flourishing of the Minoan culture in the "Old Palace Period" (1900–1700 BC), Phaistos also developed in the period from 1900 to 1850 BC. The first palace, which at this time had at least the same meaning as Knossos. It was damaged several times by earthquakes and fire, most recently in the great earthquake around 1700 BC. Chr. Destroyed. Some researchers also date the great quake to around 1650 BC. In any case, the first sporadic attempts at reconstruction failed in the 17th century BC. It was not until 1600 BC. An elaborate reconstruction of the palace began, but was never completed. At the same time the palace of Agia Triada was built, which was more richly equipped not far from Phaistos, so that it is assumed that Agia Triada was the new ruler's palace, while Phaistos was the cultic and economic center. 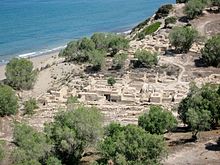 The "new palace period" on Crete existed from 1700 BC. Until about 1430 BC The end of this epoch coincides with the conquest of the island by the Mycenaean Greeks between 1450 and 1425 BC. Together. Since the destruction of the palace of Phaistos by a fire disaster around the year 1450 BC As well as the fall of other palace complexes on Crete at this time, a connection with the acts of war can be assumed. Some historians favor an environmental disaster, such as another earthquake or volcanic eruption, that could have led to the demise of the Minoan palaces and culture. However, the continued existence of the palace of Knossos until 1375 BC speaks against this. BC Phaistos as the ruling city over southern Crete from the Kryoneritis Mountains to the Dikti Mountains and that its port of Kommos would certainly have been the main target of the Achaeans. In any case, the palace of Phaistos was destroyed after the fire around 1450 BC. Not rebuilt. However, the settlement on the slope continued in the post-Minoan, Geometric and Classical periods. The administrative seat was probably relocated to Agia Triada, where a ruler's megaron , other smaller megara and a market square were built.

From around 1200 BC BC there was also a gradual decline of the Mycenaean culture on Crete, which probably existed on the island as a hybrid of the culture of the Achaean immigrants and that of the Minoan natives. After that, from around 1000 BC BC, Crete was settled by the Greek tribe of the Dorians . For Phaistos, as in general for Greece, little has been handed down from this dark age . With the end of the geometric and beginning of the archaic period around 750 BC Like other Greek cities, Phaistos developed into an important city-state ( polis ). As early as the Geometric Age (900–750 BC) there were living areas above the west courtyard of the former Minoan palace, which the excavations also carried out for the Archaic (750–500 BC) and subsequent Classical periods (500–336 BC). Chr.) Prove. In the 7th century BC New streets and temples were built, including the temple of the goddess Rhea south of the central courtyard of the old palace. The Polis Phaistos ruled the Gulf of Messara from Cape Melissa near Agio Pavlos to Cape Lithino south of Matala . The border to the main competitor, the Polis Gortyn , ran in the area of Mires . In the classical period and the Hellenistic period that followed (336–146 BC), Phaistos was the seat of a Cretan league of cities. Around 180 BC However, Phaistos was subjugated by the neighboring town of Gortyn to the east, which was then in Roman times from 67 BC. Became the capital of Crete. The city-states were dissolved by the Roman administration and Phaistos only existed as a settlement in the shadow of Gortyn. 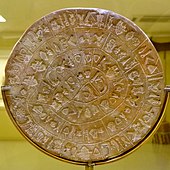 Phaistos Disc, side B 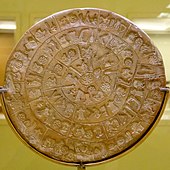 Phaistos Disc, side A.

The first excavations began in 1900 by the Italian Archaeological Mission in Crete under Federico Halbherr and Luigi Pernier . For the excavations in the Minoan layers, superstructures from later epochs had to be removed. Both parts of the old and the new palace of Phaistos were uncovered, with most of the remaining building remains belonging to the new palace. Some of the buildings from the post Minoan period have been preserved, such as the Greek Rhea temple and buildings in the upper courtyard.

The outstanding piece of the excavation work is a clay disc, stamped with symbols, found in 1908 in the north-east complex of the old palace period. This Phaistos disc is dated 1700 BC. Dated. Today, like many of the ceramics found in Phaistos, it is in the Archaeological Museum in Heraklion .

From 1950, the excavation work was continued by Doro Levi . He mainly examined the old palace and areas of the city. Since the 1970s, excavation work has focused on the area around the palace hill of Phaistos, on the slopes of which Minoan, Geometric and Hellenistic houses were built after the palace was destroyed. The excavations are still ongoing. The palace area was opened to the public. The former site of the archaeologists above the palace complex was converted into a tourist pavilion.