The alienation effect (V effect) is a literary stylistic device and the main component of epic theater according to Bertolt Brecht . An action is interrupted by comments or songs in such a way that the viewer's illusions are destroyed. In this way, according to the theory, he can take a critical distance from the portrayed.

The alienation effect essentially consists in letting familiar things appear to the viewer in a new light and thus making contradictions in reality visible and enabling a more critical and more conscious perception of what is shown. 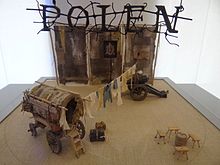 Model of a set for Mother Courage

Brecht's idea as a counterpart to the Aristotelian concept of drama

In contrast to the identification in an “Aristotelian theater”, which speculates on catharsis in the sense of empathy between performers and spectators, the epic theater focuses on the effect of the alienation effect. Instead of empathizing with the characters shown, alienation should lead to a confrontation between the actor and the viewer and the characters. Alienation creates a distance between the audience, actors and characters. The stage and equipment as well as the style of play serve this goal. The viewer's attention should be drawn to the meaning of the game, for the purpose of a critical examination of the piece (interpretation instead of identification).

"To alienate a process or a character initially simply means to take the process or character away from the obvious, the obvious and to generate amazement and curiosity about it [...] Alienation means to historize, means to present processes and people as transitory" ( Bertolt Brecht, Collected works in 20 volumes . Frankfurt a. M. 1967, volume 15, p. 301)

Brecht hoped to be able to bring about political and cultural changes by showing alternative solutions.

He rarely used classical heroes as main characters in his works, but mostly characters who appear ambivalent to the viewer (e.g. Shen Te , a good-natured prostitute who slips into the role of an unscrupulous man, or Mother Courage , a worried mother and at the same time opportunistic business woman) with whom one cannot identify more closely and with whom one cannot cheer up from the start. This distance should preserve the objectivity of the viewer.

The familiar should be recognized in the alienated; this requires active but distanced (rational rather than emotional) participation by the viewer. He should recognize himself as affected in order to draw conclusions for his own life or to intervene in the political and social conditions of his time.

The main text is the essay The Epic Theater by Bertolt Brecht. In it, Brecht advocates the thesis that the classic scheme of drama such as B. was overtaken by Sophocles , since the way of watching does not stimulate thought, but only stimulates empathy and experience. He sees the actual task of the theater, however, in teaching the audience, encouraging them to think along and, as a result, to take active action. The critical-rational component in Brecht's conception should not be overestimated by simply identifying it with numbness. Brecht saw his concept less as a teaching method of the theater, but wanted primarily to make the pleasure and the carnivalesque, ambivalent fun of the conditions in the real world accessible.

In Brecht's works, people, their motivations for action and their thinking are mainly examined, based on the thesis that “social being” determines “consciousness” (preface to the criticism of political economy by Karl Marx )

Criticism of the "anti-Aristotelian" dramaturgy

According to the Frankfurt theater scholar Hans-Thies Lehmann , Brecht by no means brought about a revolution in theater, insofar as for him the fable remained the central element of all dramas and productions and he, like the other avant-garde artists of his time, was merely looking for new staging strategies . For Lehmann, the task of the fable, as carried out in post-dramatic theater, marks the decisive turning point in the theater.