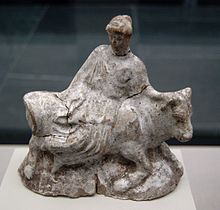 Europe and the bull
( terracotta group from Athens, around 470 BC, Staatliche Antikensammlungen in Munich)

Europe ( ancient Greek Εὐρώπη , ancient Greek pronunciation Eurṓpē ; for more information on the name see Europe ), a figure in Greek mythology , is the daughter of the Phoenician king Agenor and Telephassa . Zeus fell in love with her. He turned into a bull because of his suspicious wife Hera . His messenger Hermes drove a herd of bulls near the Europa playing on Sidon beach , which the Zeus bull kidnapped on his back. He swam with her to Matala on the island of Crete , where he changed back. The connection with the god gave birth to three children: Minos , Rhadamanthys and Sarpedon . Due to a promise made by Aphrodite , the foreign continent was named after Europe. 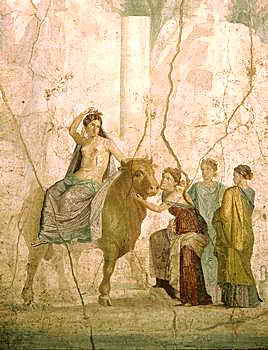 Europe and the bull, fresco from Pompeii , 1st century around the time of Ovid 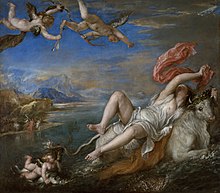 The oldest literary reference to Europe in the Iliad of Homer to find where she was the daughter of Phoinix is. Ancient narratives of the European myth can be found in the “Europa” of Moschos and in the “ Metamorphoses ” of Ovid . There are many different legends about the kidnapping of Europe.

According to Ovid, Jupiter (Roman for Zeus) turns into a bull, a particularly strong but very peaceful-looking specimen with pure, snow-white fur and small horns that look as if they were made by an artist. Jupiter mingles with a herd of royal bulls that Mercurius (Roman for Hermes) had previously driven to the beach, and thus approaches Europe, which is on the beach with her companions. Europe's fear is soon overcome, she plays with the bull, feeds him, caresses him and winds his horns with flowers. Finally she dares to get on his back - then the bull goes into the water and swims out to sea. He brings her to Crete , where he sheds his bull form and reveals himself.

Agenor sent his sons to look for their sister, Europa, but the investigation was unsuccessful. Finally, Kadmos questions the oracle of Delphi and is instructed by the latter to give up the search for his sister and instead found the Boeotian city of Thebes .

According to other sources, Europe is said to have given birth to three sons after the affair with Zeus. She was then married by Asterios , the King of Crete, and thus became Queen of Crete. Asterios, who had no children himself, also adopted her three sons.

Gerold Dommermuth-Gudrich points out that the Roman version of this legend is essentially an oriental one: Europe is “nothing more than the embodiment of Ishtar or Astarte , the Babylonian-Syrian goddess of love, whom the Greeks equate with Aphrodite . Even at the time of classical Hellenism, Europe was revered as Europa-Astarte by the Phoenicians in Sidon ”.

The historian Annette Kuhn counters the myth, which is patriarchal in the Ovid tradition , with an alternative reading that incorporates the early matriarchy . This is how she sees the matriarchy at work when the mother of Europe, Telephassa, imposed a punishment on Zeus for his foolish behavior towards Europe, namely the denial of the love of Europe and the death of nature. She interprets the myth to the effect that Zeus was only able to approach Europe in the "disguise" as a bull, which functioned as a symbol for matriarchal order - derived from the mythological symbol of the "cosmic cow", which was still widespread at the time. "Love, that is the simple message, cannot be forced."

Kuhn u. a. on the myth researcher Robert von Ranke-Graves, who "in his source-critical retelling of European history [already] pointed to [a] matriarchal tradition". 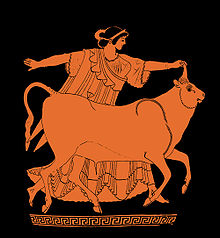 The oldest vase paintings discovered, which clearly depict Europe, date back to the 7th century BC. Later pictorial representations mostly show Europe, following Ovid's description, as she is kidnapped by the Zeus bull. She is usually only lightly dressed or completely naked, sits astride (in older depictions), sideways or half-lying (in more recent depictions) on the back of the white bull, clings to him and shows no signs of fear.

Use on euro banknotes

After Europe was already visible on the 5 DM note in 1948 , the head of the legendary figure has been depicted on the 5 € note in the watermark and in the hologram since May 2, 2013 , this is the smallest note of the second "Europe" Series “of euro banknotes. The new € 10 banknote, also with the image of Europe, has been in circulation since 23 September 2014. The portrait shown comes from a vase from southern Italy that is over 2000 years old and can be viewed in the Louvre in Paris.