In the Celastraceae family, which has recently been expanded, the vegetative characteristics and the fruits are particularly variable.

The Celastroideae and Hippocrateoideae are woody plants: shrubs , trees or lianas . The Parnassioideae and Stackhousioideae are perennial herbaceous plants . They are evergreen or deciduous. Many species carry milky juice . A vast number of taxa have tri terpene derivatives in their bark. The simple leaves are opposite, occasionally also alternate, their edges are often serrated. Most taxa have small stipules .

The flowers are terminal or axillary in mostly zymose , or rarely racemose , inflorescences or bundled together.

The flowers are hermaphroditic or unisexual. If the flowers are unisexual, the species can be single-sexed ( monoecious ) or dioecious ( dioecious ). The radial symmetry flowers are mostly inconspicuous and (rarely two) four to five-fold. Overall, the structure of the flower organs has been greatly simplified and their number has been reduced. The flowers are five, less often four-fold. The perianth is divided into calyx and crown, but the petals are often missing. Usually only one circle with (rarely only two) mostly three to five stamens is fertile ( fertile ), the inner stamen circle are (rarely only two) mostly three to five staminodes or pseudostaminodes for the production of nectar , it is usually a flat, cushion or cup-shaped disc present. Two to five carpels have become a top permanent up from constant ovary grown. In each ovary chamber there are usually one to two or more ovules per compartment . Each flower contains a stylus with a simple to five-part stigma . The pollination is effected by insects ( Entomophilie ).

There are very different fruits in this family. Most taxa produce capsule fruits . Some taxa have winged seeds (Samara), other species have seeds with a seed coat ( Arillus ). There are also berries and stone fruits . 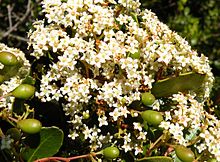 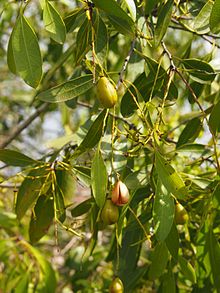 Subfamily Celastroideae: branch with leaves and flowers of Paxistima myrsinites 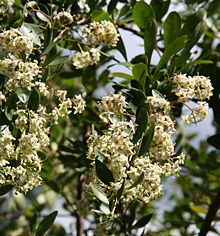 Subfamily Celastroideae: branch with leaves and flowers of Putterlickia pyracantha 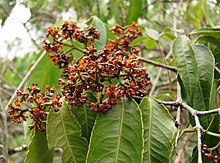