The common spindle bush ( Euonymus europaeus ), also called European or common eccentric hat , Pfaffenkäppchen , Pfaffenkapperl , Spillbaum or spindle tree , is a species of the spindle tree family (Celastraceae). In 2006, the eel- cap was voted poisonous plant of the year .

As a deciduous, upright, richly branched, sparse shrub, the common spindle bush reaches heights of growth of up to 3 m, and as a small tree up to 6 m. The branches ( rod bush ), which are often bluntly square in cross-section, have an initially green to later gray-brown bark , there may be two to four narrow cork strips (cork wings are relatively rare, but they are also found on the elm ). Shrubs and trees have a gray-brown, longitudinally fissured bark with age . It is windproof and frost hardy . The plant parts are poisonous .

The opposite leaves have a petiole and an egg-shaped to lanceolate leaf blade with a length of 3 to 12 cm with a finely notched to serrated edge and bare leaf surfaces on both sides. They show a very beautiful, partly bright red autumn color.

The flowering period extends from May to June. Axial umbilical inflorescences are formed on a 1 to 3 cm long inflorescence stem. They usually contain two to six, rarely up to nine flowers .

The hermaphrodite , four-fold flowers are small and inconspicuous with a double flower envelope . The four sepals are green and 1 mm long. The four petals are 3 to 5 mm long and greenish to white. The nectar is secreted by the fleshy, four-lobed disc and attracts many species of insects, especially ants and flies , as flower visitors. Only the outer, episepal (standing in front of the sepals) circle with four stamens standing on the disc is present, the inner, epipetal circle has failed. The ovary is on top.

The fruits standing in a protruding fruit cluster ripen in September to October and then open with four flaps. The purple-pink to carmine-red colored, four-lobed capsule fruits are quadruple, 1 to 1.5 cm wide and contain one to four seeds . The white, egg-shaped seeds with a length of 5 to 7 mm are completely covered by a thin, orange-colored seed coat ( arillus ), have a green embryo and hang out on elongated stalks from the opened capsule.

The species has chromosome number 2n = 64.

The common spindle shrub is a winter bare shrub with evergreen branches, i.e. a rod shrub. It is a shallow root with VA mycorrhiza . The flowers are pre-male nectar-bearing disc flowers. The species is dioecious, i. H. In addition to plants with hermaphrodite flowers, there are also those with only male and those with only female flowers; in the latter the pollen sacs are numb. The nectar is given off by the fleshy discus. Visitors are insects of all kinds, especially flies . Flowering time is from May to June.

The fruits are 4-compartment, columnar capsules. The seeds hang out of the opened capsule on the elongated stalk, the funiculus , for a while. This promotes mouth spread through z. B. Thrushes and robins ; these peel off the fleshy aril , the remaining seeds falling to the ground. The seed contains abundant nutrient tissue ( endosperm ) and already green cotyledons . Fruit ripening is from August to October. The germination takes place only after a dormancy of 3-4 years. Vegetative reproduction takes place through rooting creeping shoots.

Since the capsule fruit resembles the biretta , a headgear used by Catholic clergy , the plant is called a Pfaffenkäppchen. The nickname robin bread comes from the fact that birds like to eat the seeds in winter.

With the exception of the maple genus ( Acer ), trees always have female names in Latin . This has a mythological background connected with the tree nymphs who inhabit it . This rule from classical Latin is used in botanical nomenclature primarily for species that are native to Europe or have been known since ancient times. One example is the species name of the common beech Fag us sylvatic a . Since there are tree-shaped Euonymus species outside of Europe , the entire genus of the spindle bushes ( Euonymus ) has been treated as female by many scientists, while others preferred the male form. Therefore, in addition to the spelling Euonymus europaea , the variant Euonymus europaeus was always common. In 2000 this case was settled by a decision of the Nomenclature Commission for the International Code of Botanical Nomenclature . Euonymus is to be treated as male, the scientifically correct name of the species is Euonymus europaeus L.

The spindle bush is often attacked by the 2 cm long, yellowish, black-spotted caterpillars of the eeligothic spider moth . The infected bush is then wrapped in a dense web in which the caterpillars eat the leaves. If the infestation is moderate, the affected plant is not endangered, the bush can sprout again through the web, and the use of insecticides is not automatically necessary.

The spindle bush is attacked by the rust fungus Melampsora evonymi-caprearum with spermogonia and aecia . The fungus Septogloeum carthusianum causes light brown leaf spots, bordered by the leaf veins and with a dark margin, which can lead to premature leaf fall. As a rule, however, the shrub is not seriously damaged.

The spindle bush occurs mainly in Europe , with a focus on Central Europe . In the north it occurs to Ireland , southern Scotland , southern Sweden and Latvia , in the south to northern Spain , Sicily and central Greece . The distribution area extends after Asia into northern Asia Minor and the Caucasus region .

The plant prefers forest edges, hedges and slopes. The eucoat needs nutrient-rich, calcareous and low-salt soils. According to Ellenberg , this type of plant is a moderate heat indicator, a freshness indicator in locations with a moderate level of nitrogen and a class character of sloe bushes and related societies (Prunetalia spinosae), but also occurs in the Alno-Ulmion and in the soaked Carpinion and Fagion.

In the Allgäu Alps, the species in Bavaria between Hinter- and Vorderreute near Wertach rises up to 1100 m above sea level. 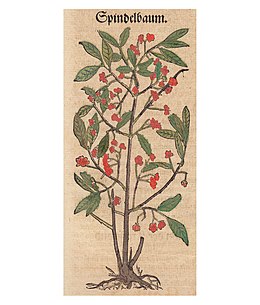 The "spynel tree" was first mentioned in the 12th century. In the " Physica " attributed to Hildegard von Bingen , it was recommended to drink the ashes, which were burned from the wood directly under the bark of the tree, in wine to prevent dropsy. The wine in which the fruits were cooked should help against spleen and stomach problems. In the 16th century, it was recommended in the “Little Book of Burnt Waters ” to drink the distilled water from “Spindelbom”, also called “Pfäfferhödel”, in a full bath if the kidneys and urinary bladder were inflamed. This would drive out the heat and tumor with the urine. Which part should be used to make the distillate was not specified. In his “ Small Distilling Book ” from 1500, Hieronymus Brunschwig took over the indications from the “ Little Book of Burnt Waters” in the chapter on “Spindel boum” “Hanhödel”. As for the part used, he added: “… The best part and citrus ditillation is the leaves and the fruit vnder eynander burned ſo the fruit is citrusy and red. … “Of the fathers of botany , only Hieronymus Bock mentioned the» spindle tree «-» Hanhödlin «, which he described in detail. However, he did not want to comment on the effect, especially the leaves and fruits. This suggests that he was aware of the plant's toxic effects.

All parts of the plant of the common spindle bush are poisonous. The seeds contain steroid glycosides (cardenolides) in particular , as well as the alkaloids evonine , caffeine and theobromine . The bark contains bitter substances , tannins and phlobaphene , the leaves also triterpenes .

Consumption of seeds leads to abdominal pain, nausea, vomiting, and diarrhea. This can lead to severe irritation of the gastrointestinal tract . The glycosides also have an effect on the heart muscles. Also kidney damage, circulatory collapse, drowsiness and liver swelling are among the symptoms that occur when consuming the fruit. Poisoning occurs especially in children who are seduced by the attractive-looking fruits. This can lead to liver and kidney damage and, depending on the severity, death. In the literature there are different statements about which dose is already fatal. All symptoms can appear 18 hours after consuming the poisonous parts of the plant. First aid measures include inducing vomiting and administering activated charcoal. Other measures include gastric lavage , the administration of mucilaginosa to reduce the irritation of the gastrointestinal tract, and the administration of barbiturates and benzodiazepines to counteract the cramps.

The Pfaffenhütchen is a valuable corridor wood for erosion protection , bank and embankment rehabilitation . The wood is used in the turnery and for drawing charcoal. It is also used for the manufacture of cleaning wood for watchmakers. Due to its beautiful autumn color , the red fruits and the unusual, angular shape of the branches, the eucoat is often planted as an ornamental wood in gardens and parks.

The name "spindle bush" comes from the fact that the wood was previously used for hand spindles .

Poisonous Plant of the Year in Germany