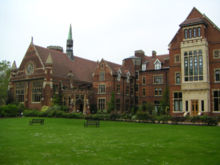 The Homerton College is a college of the University of Cambridge and is numerically the largest of the 31 colleges. It is best known for its teaching tradition and until 2001 only accepted students with teaching subjects. It is named after Homerton Square in Hackney , London.

Due to a very complex history, the year of foundation cannot be clearly determined, but the origins of the college can be found in the 17th century.

Head of the College