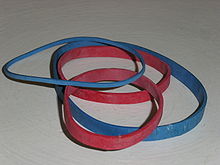 Elastomers ( Singular the elastomer , even Elaste ) are dimensionally stable but elastically deformable plastics , whose glass transition point is below the temperature of use. The plastics can deform elastically under tensile and compressive loads, but then find their way back to their original, undeformed shape. Elastomers are used as material for tires, rubber bands, sealing rings, etc. The best-known elastomers are the vulcanizates of natural rubber and silicone rubber .

A is a schematic of the polymer chains of an unloaded elastomer. B shows the same elastomer under the action of mechanical force (tensile force in the vertical direction). After releasing the load, the elastomer returns to assembly A. The dots (•) represent cross-links between the long polymer chains.

In polymer is a long chain molecules. The individual chain elements can be rotated relative to one another along these chains. In elastomers, this rotatability is so pronounced that the molecules twist into a so-called polymer coil. This endeavor is merely the result of the rotating movement along the chain in completely random directions. The arrangement of the individual atoms in the chain around the center of the molecule corresponds to a Gaussian distribution .

The main reason for the elasticity of the rubber is the ability of the coiled polymer chains to react to a tensile load by stretching or unbundling the chains. If a polymer is stretched by tensile stress, the chains align themselves preferentially in the direction of the load. So the elastomer is stretched.

As soon as the tensile stress is eliminated or reduced, the chains start again with the random rotary movement, in the course of which they again assume the statistically based Gaussian distribution. The chains return to their preferred coil-like conformation - the elastomer contracts. The elasticity consists in stretching under tension and in contraction after the tension has dropped. This effect is similar to a gas that, once compressed, expands back into the newly acquired space after decompression due to the random movement of the gas atoms. It is an entropic effect; this form of elasticity is therefore also known as entropy elasticity . As a rule, it represents the largest part of the elastic effect of an elastomer.

A very low energy-elastic contribution can result from crosslinking in elastomers . As a rule, however, the energy elasticity does not play a role in elastomeric plastics. Energy-elastic bodies are hard materials in which a tensile load causes the molecular or atomic arrangement to deviate from the energetically most favorable position. If the tensile load is eliminated, the atoms or molecules “slide” back into these energetically more favorable positions. In particular, the modulus of elasticity of metals and thermosets is determined by the energy elasticity.

What is special about elastomers is that their elasticity (unlike metal springs ) is not based on the forces of attraction between changing atomic distances, but rather represents a static-dynamic balance between order and entropy. The elastomer therefore does not store any tension energy in itself, but rather radiates the energy supplied during stretching (and other deformations) as heat and instead increases its internal order. Like a muscle , it therefore requires a supply of energy to contract again, which the elastomer takes from the ambient heat through Brownian molecular motion .

When it is very cold, elastomers lose their strength and can freeze as hard as glass. A moderate increasing the temperature significantly increases the elasticity of the elastomer, as it supplies it with energy, making it work can do. This phenomenon is known as the Gough-Joule effect . (Too high a temperature, however, causes decomposition.) The deflection is significantly greater than the thermal expansion of solids and is more similar to the mechanical behavior of gases in a cylinder with a moving piston. You can even build a simple heat engine out of a flexible wheel with spokes made of rubber bands ; If the wheel is heated on one side, its rim is deformed on one side by contracting the elastomer, which causes the wheel to rotate by shifting the center of gravity, as the bands relax again on the cooler side.