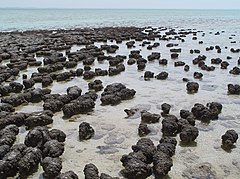 Stromatolite from the Asse near Braunschweig, a specimen of the type on which Kalkowsky's description from 1908 was based

Stromatolites (from ancient Greek στρῶμα stroma , German `` ceiling '' and λίθος lithos `` stone '') are biogenic sedimentary rocks that are formed by the capture and binding of sediment particles or the precipitation of dissolved substances as a result of the growth and metabolism of microorganisms in a body of water. They are mostly layered and often consist of very finely layered limestone . The inner structure of the stromatolites is different: flat, even layers, layers arched upwards, several arched layer packages next to each other (columnar). Some of them are reminiscent of a cauliflower with their peeled structure of tubers, columns or wavy layers .

Most of the oldest known fossils are stromatolites, and so they might provide clues as to how life evolved from very simple to more complex forms.

The term and the name stromatolite were introduced by Ernst Kalkowsky in 1908 with reference to occurrences in the north German red sandstone. The holotype used by Kalkowsky in the first determination of the rock is in the Museum of Mineralogy and Geology Dresden , of which he was director.

The prerequisite for the formation of stromatolites are biofilms that consist of microorganisms (microbe mats). In recent stromatolites, the 1–10 mm thick biofilms usually consist of a base layer of heterotrophic bacteria, embedded in a matrix of slime ( polysaccharides and other biopolymers ) formed by the microorganisms , and an upper layer of predominantly phototrophic microorganisms, associated with a lower one Proportion heterotrophic. The biopolymers play a key role in binding the sediment particles.

Most stromatolites are made of limestone . This is formed by precipitation. The prerequisite is a generally marine waters with a high concentration of calcium - and bicarbonate - ions . Intensive microbial assimilation of carbon dioxide (CO 2 ) alkalizes the environment and thus shifts the dissociation equilibrium of the carbonic acid in favor of carbonate ions. As a result, the solubility of calcium carbonate is lowered, so that lime precipitates. Certain biopolymers of the biofilms, with anionic (negatively charged) atom groups to which the positively charged calcium ions bind, represent crystallization nuclei. In recent stromatolites, marine, benthonic cyanobacteria (formerly also known as "blue-green algae") are the main cause ) lime precipitation through intensive CO 2 assimilation in connection with its photosynthesis. Mainly it is about oxygenic photosynthesis with water as reducing agent for the reduction of the CO 2 and with the formation of oxygen (O 2 ), but partly also about anoxygenic photosynthesis with hydrogen sulfide (H 2 S) as reducing agent and formation of sulfur (S) or Sulfate (SO 4 2− ).

The accumulation of bound sediment and / or precipitated lime traps and covers the microorganisms of the biofilm. However, they constantly grow upwards through growth in length or reproduction, so that the biofilm at the base becomes inactive and dies, but continues to grow upwards. This causes the stromatolite to grow in height. The reasons for the stratification are presumably diverse and not yet fully understood. Possible causes include: daily solar rhythm, episodic sediment input, seasonal change in the chemical composition of the water, changes in the biofilm biocenosis . Little is known about growth rates. The recent stromatolites in the Hamelin Pool (see below) grow about 0.3 mm per year.

Stromatolites can only arise if the biofilm necessary for their formation is not eaten away by other organisms. This was the case with stromatolites of the Precambrian because there were no such creatures. Therefore there are many stromatolites from the Precambrian; in the case of younger fossil and recent, this was or is only the case in milieus that are unfavorable for other living beings, for example with a high salt content.

The fine-layer structure can be clearly seen in these stromatolites from the eastern Andes south of the Bolivian city of Cochabamba . Age: Maastrichtian , chalk, about 70 mya . 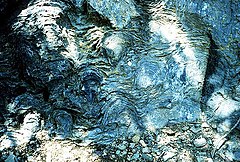 Stromatolites are considered to be the first recognizable structures built up by organisms. They originated in the Precambrian , so have existed for more than 3.5 billion years; The Warrawoona series, found near North Pole in the Pilbara region in Western Australia, is 3.45 billion years old . Stromatolites of the Fig Tree Group, Swaziland Supergroup, in Barberton Mountain Land , South Africa, are around 3.4 billion years old . According to a study published in 2016, a find in Greenland in the Isua gneiss is even 3.7 billion years old .

In some periods of the earth's history - long before corals existed - the stromatolite formers were important reef formers. Up until a billion years ago, stromatolites were widespread in almost all coastal waters. The diversity and distribution of stromatolites decreased 700 million years ago. Stromatolites are very rare from 450 million years before the present. It is believed that the biofilms were grazed by the emerging multicellular eukaryotes .

Recent stromatolites, which are in the process of being formed, can only be found in a few ecological niches, which are mostly characterized by increased salinity: lagoons , continental salt and soda lakes . A conclusion about the environmental conditions of fossil stromatolites or their producers is not necessarily given.

Stromatolites that form occur in Australia in Shark Bay , in Pink Lake or Spencer Lake in Western Australia , in Solar Lake in Egypt, Han-Nan Island in China , in the Persian Gulf , in Brazil in Lagoa Salgada near Rio de Janeiro , in Green Lake in Texas, in Mono Lake in Mono County (California), in Yellowstone National Park in the USA, in Bermuda , in the Bacalar Lagoon on the Mexican peninsula of Yucatán , on Lake Untersee in Antarctica , in the largest soda Lake of Earth, Lake Van in Turkey , as well as in the alkaline crater lakes of Satonda in Indonesia , Niuafo'ou in Tonga , Kauhako in Molokai (Hawai) and Alchichica in Puebla (Mexico), and in the ejections of the Minoan eruption of Santorini , Greece and a few other places. 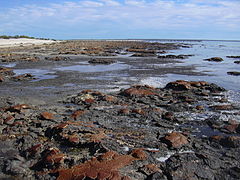 An example of still growing stromatolites are those in the Hamelin Pool Marine Nature Reserve on Shark Bay in Western Australia. They were discovered in June 1956 and are part of the UNESCO - World Heritage . The biofilms that form these stromatolites can survive because of the extreme salt content of the water, which is about twice as high as in the open ocean, because the animals grazing the biofilm (such as snails) are kept away by the high salt concentration. The stromatolite biofilms have no natural enemies under these extreme conditions. The stromatolites of the Hamelin Pool grow very slowly, a maximum of 1 cm in about 30 years. Structures about 1 m high are therefore almost 3000 years old.

The primary production of organic matter by cyanobacteria in the biofilms on these stromatolites corresponds to an assimilation of carbon from carbon dioxide into organic compounds of around 17–113 mg · m −2 · h −1 .

A second occurrence of stromatolites in Australia can be found in Lake Thetis near the small town of Cervantes in Western Australia. It is a slightly hypersaline (53 g / l salt), alkaline (pH 8.5–9) salt lake with a depth of around 2–3 m. It contains dome-shaped stromatolites with a diameter of 30–40 cm and a height of around 1 m, mainly made of aragonite . The upper layer of the biofilms on it contains mainly representatives of the Entophysalis group of cyanobacteria ; the lower layer of the biofilms is formed from heterotrophic bacteria.

Stromatolites as indicators of oxygen formation

The occurrence of stromatolites - together with the occurrence of band iron ores - is regarded as a sign of the occurrence of molecular oxygen (dioxygen, O 2 ) through oxygenic photosynthesis , i.e. through the light-driven reduction of carbon dioxide to organic substances with water as a reducing agent , which leads to Oxygen is oxidized . (Schidlowski, p. 528) In this context it is assumed that cyanobacteria, as oxygenic phototrophs, have dominated the stromatolites. This view is justified by the following arguments:

However, this view was questioned at an early stage and a number of ambiguities were revealed. In the further course of the investigation, more specific objections were raised. Several findings make the compelling necessity of the model appear questionable:

The current state of knowledge can probably be summarized as follows: It is possible that the first appearance of stromatolites and band iron ores indicates the presence of dioxygen. The evidence for this is not, however, clear evidence; Oxygen could also have been formed for the first time later through oxygenic photosynthesis.