Sheep's milk is produced by the sheep for the lamb , but it is also consumed by people. 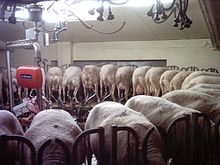 Sheep's milk is professionally produced in many countries, here for the production of Roquefort cheese

Sheep 's milk was already produced by the shepherds of ancient times. The sheep was domesticated long before the cattle , about 8,000 years ago . The Bible also speaks of sacrificial lambs: These lambs were slaughtered very early in order to be able to milk the ewe.

Sheep's milk has long been part of the human diet. Yoghurt e.g. B. was originally made from sheep's milk only; in the Caucasus and in many other regions of the world the frugal sheep were superior to the more demanding cattle.

Sheep's milk has hardly any tradition in Germany. Only in times of need were sheep (next to goats) milked as “the little man's cow”. There was a small renaissance in the early 1980s, when milk sheep became increasingly popular for self-sufficiency.

Unlike in the Mediterranean countries or in the Balkans, sheep's milk production is relatively low in Germany. Paradoxically, one of the most productive milk sheep breeds comes from Germany: on the German North Sea coast , the East Frisian milk sheep was bred more than 300 years ago , which is superior to most other sheep breeds in terms of milk yield. However, it always remained with small farms, its milk was not used commercially. In addition to a few full-time farms, there are still hundreds of hobby shepherds in Germany.

Sardinian sheep, one of the best dairy breeds in the world

In Switzerland, the proportion of full-time farms is likely to be higher. However, only about half of the sheep's milk produced is marketed in Switzerland. At 56 percent, the majority of producers rely on ecological production .

Sheep's milk is often not marketed fresh, but z. B. processed into sheep cheese . Famous examples are the Roquefort and Brocciu from France, the Italian pecorino and the Greek feta . The Kazakh cuisine knows sheep's milk as a drink, although kumys - fermented mare's milk - is more common there. In Spain and the Basque Country , curd made from sheep's milk is known as Cuajada . In addition to jardum , the foam that is made from salted sheep's milk that is cooked with mild heat, Serbian cuisine also features the dish paprike u jardumu - peppers in sheep's milk.

According to Jüngst 2004, this information varies depending on feeding, season and individual animal.

The fat content of sheep's milk is almost twice as high as that of cow's milk. However, the composition of the fats differs. While the proportion of cholesterol is roughly the same, sheep's milk has a multiple higher content of CLA ( conjugated linoleic acid ) than cow's milk .

The amount of vitamins is also worth mentioning: sheep's milk contains more vitamins A, D, E, riboflavin, B6, B12 and vitamin C than cow's milk. The folic acid content of sheep's milk, however, is lower.

In-depth systematic studies on the medical and biochemical mode of action and the success of targeted supplementation with sheep's milk products are still pending. These would be needed to substantiate hypotheses about the medicinal properties of sheep's milk.