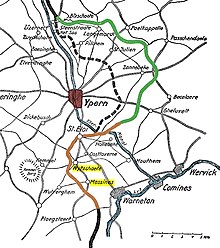 The Wytschaete arch (brown) with the Ypres arch (green) to the north around Ypres , 1915

The Wytschaete Arch was about 15 kilometers long, semicircular front arch in West Flanders in the northern part of the Western Front of the First World War . The front arch south of Ypres was mostly on a ridge with a height of up to 84 meters above sea level. The position curve ran over the places Wijtschate (previous name: Wytschaete ) and Mesen (previous name: Messines ) and connected to the Ypres arch in the north . A four-year trench war raged on the Wytschaete-Bogen . In 1917 the battle of the Wytschaete-Bogen led to a straightening of the front , whereby the arch was abolished.

The front arch, up to five kilometers deep, encompassed an area of ​​around 50 km², which was mainly used for agriculture. The approximately 60 individual courtyards in it were expanded militarily. The curve ran in the north, starting at " Height 60 " via St. Eloi, the Ypres- Lys Canal , to Wytschaete at " Height 80 " and Messines, in order to rejoin the straight front line southwest of Warneton. The German positions were on the long ridge between Messines and Wytschaete. The ridge is a variedly patterned terrain with courtyards, wooded areas, avenues, fields and hedges. The positions on the contour line offered the German troops considerable strategic advantages. From there they could control the lower Allied positions south of Ypres and direct the fire of their artillery, which - protected from enemy sight - was positioned in the east of the range of hills. The only disadvantage of the position was the good view of Kemmelberg, about 3 km to the west, at a height of 159 meters above sea level, which was in the hands of the Allies.

Capture of the destroyed Wytschaete by British troops at the Battle of the Wytschaete Arch , 1917

The front arch was formed during the First Battle of Flanders in 1914 as a result of the advance of German troops to the west. At the end of October / beginning of November 1914 they took the strategically important mountain ridge between Messines and Wytschaete and settled on it.

During the Third Battle of Flanders in 1917, the Wytschaete-Bogen was overturned by the advance of Allied troops. This was already achieved through the Battle of the Wytschaete Arch as an introductory battle . It began with continuous British fire on May 21, 1917, which lasted until June 7, 1917. Immediately after the fire had ceased, 19 mines along the Wytschaete Arch were blown up at 3:10 a.m. , creating huge craters and killing up to 10,000 German soldiers. After the explosions, British units stormed several kilometers into the front arch and, with the complete conquest of the front arch on June 14, 1917, achieved a straightening of the front.

In April 1918, during the Fourth Battle of Flanders , German troops recaptured the terrain in the Wytschaete-Bogen that had been lost in 1917 and advanced beyond that to the Kemmelberg. During the Hundred Days Offensive , the Allies recaptured the area in September 1918.

The painter Otto Dix , who was deployed to Ypres during the First World War, created a painting in his series Der Krieg with the title "Evening on the Wijtschaete Plain (November 1917)". It shows a field full of dead people.