Artillery with siding on the western front near Ypres (Belgium) 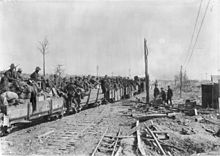 The Trench Railways , literally translated as (Schützen) trench (feld) bahn , were the military (field) railways in the trench warfare , in particular the extensive rail network to and on the western front of the Entente and its allied powers (allies) in World War I based on Light railways with a gauge of 600 mm.

The concept was developed on the German side with the Heeresfeldbahn (also from experience in German South West Africa , which set up narrow-gauge railways from 1897, which proved to be militarily useful in the war against the Herero 1904-1907). This was adapted by the Western powers during the war - there were precursors in a British study which came to the decision in 1913 to set up troops for minimum-gauge railway construction; However, these only took over older locomotives.

It was only when the war ended in trench warfare in 1915 that operators such as the British War Department Light Railways ( narrow-gauge railways of the War Department ) began to have extensive new track equipment and rolling stock produced. When completed in 1917, the Trench Railways, the light railways of the trenches, represented the most extensive contiguous light rail system in history, with connections to the coast, where connections were made to the British industrial areas with RoRo ships .

Colonel Prosper Péchot pushed ahead with the French adaptation of the field railways for supplying the front - numerous military bodies for field railways originate from his work, as well as the Péchot-Bourdon locomotive type named after him . With the engineer Bourdon, he had been working on military versions of the field railways since 1888, and test routes were implemented by the 5th Pioneer Regiment (5e régiment du génie) in Toul . The modular principle, referred to in French as Système Péchot , comprised rail sections with a length of 5 meters, 2.5 meters and 1.25 meters with a rail weight of 9.5 kg / m, so that the long five-meter sections could be installed by a team of four. During the First World War, his system, based on the 60 cm Decauville field railways, quickly caught on. Before the war, the military material at Toul comprised 150 km, 150 wagons and 20 locomotives. By the end of the war, the railway pioneers had laid 7,500 km of rails. Order lists show 280 Péchot-Bourdon; 600 diesel locomotives were ordered from the contract manufacturer Baldwin.

After the trench warfare in World War I , the trenches field railways were widely used in civilian areas. In particular, the Decauville field railways, which represented the standard on the British-French side, shaped the industrial railways decades later. During the war, the then leading American company Baldwin Locomotive Works built a total of 5,551 locomotives in various designs for the Entente Allies (only a fraction saw the end of the war intact). The Péchot system was continued for the construction of the Maginot Line and was not decommissioned until 1940 after the Western campaign .