Army field railway in the Argonne during the First World War 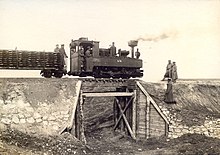 Brigadelok in Bulgaria during World War I.

With the development of the railroad in the 19th century, the military also discovered the advantages of this new type of transport. In contrast to transport on the then insufficiently developed road network, the railroad was able to transport large quantities of supplies , weapons, ammunition and other heavy elements as well as troops quickly and efficiently. For use on the war fronts , special light rail systems were developed, which were usually designed as narrow-gauge railways . The transportable light rail system from Decauville served as a model . In addition to the general advantages of the narrow gauge, such as the low space requirement and tight curve radii, there was also the fact that vehicles and track material were transportable and thus quickly adapted to the changing frontal lines. German army field railways were uniformly designed with a 600 mm gauge, as were the French ones. The War Department Light Railways of the British Empire also used 600 mm (instead of the 597 mm or 1 foot 11½ inches usually used there) in order to be compatible with the allied French. Austria-Hungary relied on 700 mm gauge for transportable light railways, while the Bosnian gauge of 760 mm was used on routes of more permanent character .

In contrast to road transport, the operation of an army field railway requires the construction of a simple, but expensive and time-consuming rail infrastructure. This was usually set up by specially trained troops, the railway pioneers. As the hostilities progressed, prisoners of war were also used for this purpose . The operation of the Heeresfeldbahn is tied to this infrastructure ; in contrast to trucks , it is not flexible enough in the event of shelling or other effects of war . Army field railways could also be used relatively quickly by the enemy to the disadvantage of their builders if they had to retreat and the railroad could not be dismantled or destroyed quickly enough.

Because of these disadvantages, the Heeresfeldbahn completely lost its importance in the second half of the 20th century and was replaced by the now technically sophisticated all-terrain road vehicles , which also do not require specially trained drivers. Air transport by helicopter has now established itself in particularly rough terrain . To a lesser extent, light railways in the military sector were only used for internal transport tasks in larger military installations, e.g. B. as a means of transport in ammunition depots. Some military training areas were also used for field railways: large targets were mounted on field railroad trucks, which were pulled by locomotives as mobile targets for target practice. In England, such a system has been preserved with the Rowtor Target Railway .

Heeresfeldbahn locomotive HF 160 D (ÖBB 699.1) on the Steyrtalbahn converted into a tank locomotive

In addition to the typical tasks on the war fronts themselves, longer feeder routes built by military units or on behalf of the military were sometimes carried out by civilian transport tasks after the hostilities or other military uses. The supply line from Bosnisch Brod to Zenica ( Bosnabahn ) , established in the 1870s as an Austro-Hungarian Army Railway, was quickly expanded into a full-fledged narrow-gauge railway for the general public, establishing the extensive route network in the so-called Bosnian gauge of 760 mm. Even after the First World War , in which Heeresfeldbahnen were used extensively, some lines were now used for public transport. B. the Gardena Railway in Tyrol was built as a supply line to the Dolomite front. The more than 200 km long Skopje – Ohrid railway in Macedonia with a gauge of 600 mm was also built as such a military railway. Until she was hired, she drove with the original brigade locomotives and field railroad cars.

Transportable field railway track material, locomotives and wagons were often sold to civilian buyers after the war had ceased and the units in charge were disbanded as a result of the political changes. This material was still used decades after the end of the war. In some peat factories, track yokes of the imperial army field railway can still be found today, and such steel witnesses can also be found in field railway museums.

Special rolling stock was usually developed for army field railways . Your locomotives, the so-called Heeresfeldbahnlokomotiven , are characterized by a simple and robust construction and can safely negotiate very tight curve radii even with extremely poor track conditions . These design features also made them interesting for civilian use, for example on forest railways in forestry or on field railways.

Casemate railways are a special form of army field railways .