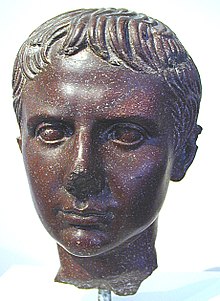 Portrait head of Gaius Caesar in the Badisches Landesmuseum Karlsruhe

Gaius (Iulius) Caesar (* 20 BC ; † February 21, 4 AD in Limyra , Lycia ) was an adopted son of the Roman emperor Augustus and his designated successor until his death.

Gaius Caesar was the eldest son of Marcus Vipsanius Agrippa and Iulia , daughter of Augustus. He still had four siblings: the brothers Lucius Caesar and Agrippa Postumus and the sisters Iulia and Agrippina the elder .

Since the year 1 BC He was married to Livilla , the daughter of the older Drusus and the younger Antonia .

Chosen by Augustus as possible successors, he and his younger brother Lucius were 17 BC. Adopted by this. Gaius Caesar took on numerous offices and titles, including that of princeps iuventutis ("leader of the chivalrous youth"). 4 v. He was designated consul and pontiff for the year 1 AD .

2 v. Gaius Caesar was endowed with an imperium maius and sent to the east of the Roman Empire, where, after a long journey mainly through the Greek area and a meeting with Tiberius , a stepson of Augustus, on January 1, 1 AD . took up his consulate.

He was wounded during the siege of Artagira in Armenia and died on the way home in Limyra in Lycia , where a cenotaph was erected in his honor . Since his brother Lucius had already died in AD 2, Augustus determined his stepson Tiberius , the eldest son of his wife Livia , and Agrippa Postumus as new heirs and presumptive successors by adoption.

Gaius Caesar is also treated in all Augustus biographies.