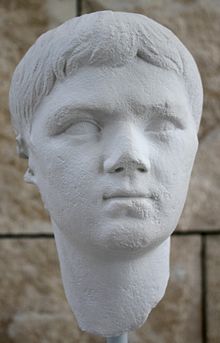 Lucius (Iulius) Caesar (* 17 BC ; † August 20, 2 AD in Massilia ) was the second son of Iulia , daughter of Augustus , and her second husband Marcus Vipsanius Agrippa .

In addition to his older brother Gaius Caesar , who like himself from Augustus 17 BC Was adopted in the principate to ensure the succession , Lucius had three younger siblings, the sisters Iulia the younger and Agrippina the elder as well as the brother Agrippa Postumus . The Caesares - as the two adoptive sons of Augustus are often referred to in modern research - were given honors and offices by their adoptive father at an early stage. Among other things, Augustus organized gladiator fights in her name and co-opted her into the college of priests . Lucius was promised Aemilia Lepida , who came from a noble family, as his wife.

On the occasion of the creation of the men's toga , Lucius was 2 BC. Like his older brother three years earlier, appointed princeps iuventutis ("leader of the chivalrous youth"). The highlight of the prominence of the two sons of Augustus was their designation as consuls when they had barely outgrown childhood. However, Lucius died in AD 2 on the way to Spain , where he was to be introduced to the army before he could hold the highest office of state. He was buried in the tomb of the Julio-Claudian dynasty , the Augustus mausoleum .

Lucius Caesar is also treated in all Augustus biographies.