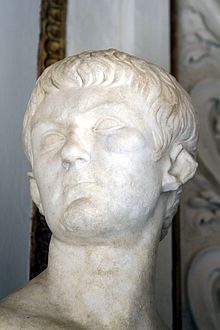 Agrippa was born after the death of his father, hence the name "Postumus". After the death of his older brothers Gaius Caesar and Lucius Caesar , he was adopted in 4 AD by his grandfather, Emperor Augustus, together with his stepson Tiberius under the name of Agrippa Iulius Caesar and thus a possible heir to the throne. Allegedly because of his way of life - more details are not known - he was disinherited two years later and, like his mother before him and his sister Julia, banished first to Sorrento and in the year 7 to the island of Planasia .

Immediately after Augustus 'death, he was killed by an officer so that Tiberius' claim to the throne could not be challenged. Tacitus mentions this as "the new government's first crime". Already in antiquity it was disputed whether the order had been given by Augustus or already by Tiberius.

The slave Clemens , who then pretended to be Agrippa and gathered a considerable crowd of supporters in Italy, was killed in Rome on the orders of Tiberius in 1616.