The Arch of Titus with the Colosseum in the background

The Arch of Titus ( Italian Arco di Tito ) is a single-gate triumphal arch on the Velia in Rome . It is the oldest preserved triumphal arch in the ancient city. It was donated at the end of the first century in honor of the emperor Titus for his victory over the rebels in Judea and the conquest of Jerusalem in 70 AD. Today it is part of the archaeological site of the Roman Forum and the Palatine Hill . Since the excavations in 2014 and 2015, the foundations of a second, three-sided Titus Arch at the Circus Maximus , which was previously only accessible from written sources, have been archaeologically secured.

The arch stands at the highest point of the street ( in sacra via summa ) that leads from the Roman Forum to the Colosseum . In the ancient literature known today, the Arch of Titus is not mentioned anywhere. However, the dedication inscription only preserved on the east side enables a clear assignment. It is:

The Senate
and the Roman people (who erected this arch) to
the deified Titus Vespasianus Augustus
the son of the deified Vespasian .

This shows that the monument was donated to the deified Titus by the Senate and the people. It was created after the death of the emperor, during the reign of his younger brother Domitian . 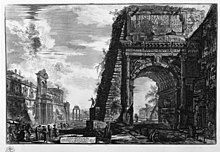 Piranesi : The Arch of Titus in 1748 as it was before the renovation by Valadier 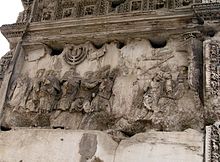 Depiction of the Roman triumphal procession in Rome in the inner wall of the Arch of Titus. It depicts Roman soldiers, Jewish slaves and Roman spoils of war from the Jerusalem Temple , especially the golden menorah (seven-armed candlestick).

Coffered ceiling inside the arch

The Arch of Titus in the Middle Ages

Around the year 1000, the Arch of Titus became one of the entrance gates of the fortress of the noble Frangipani family . This fortress enclosed the Temple of Venus and Roma , parts of the Palatine , the Arch of Constantine and later the Colosseum . 500 years later, the Frangipani fortress was gone. The Arch of Titus, built over with a tower, now leaned against the monastery building of Santa Maria Nuova . It was not until the architect and archaeologist Giuseppe Valadier removed the medieval components in 1822 and reconstructed the ancient appearance.
The Arch of Titus served as a model for the Parisian Arc de Triomphe , which was commissioned by Napoléon Bonaparte to glorify his wars of conquest.

The Arch of Titus in modern times

During the Second World War, the British are said to have uncovered a conspiracy by Jewish officers who are said to have planned the blowing up of the triumphal arch during the conquest of Rome. On the night of May 14, 1948, when the state of Israel was proclaimed, the Jewish community of Rome gathered with the Italian chief rabbi under the Arch of Titus to hold a memorial service there.

The arch is 14.50 meters high, 13.50 meters wide and 4.75 meters deep. It is a simple construction with only one vault, which is divided on each side by four half-columns. It was built from Pentelic marble .

The keystone of the vault is adorned by the goddess Roma and the genius of the Roman people. In the middle of the vault, the apotheosis of Titus is depicted in a box , who is carried to heaven by an eagle. A small frieze on the architrave is only preserved in the middle of the east side. It shows the victory of Vespasian and Titus over the Judeans in the year 70. Inside the vault there are two large panels depicting two episodes of the triumph over the Judeans. The southern image shows the beginning of the triumph ceremony with the procession through the victory gate, with servants carrying the booty from the Jerusalem temple . These are the menorah , the silver trumpets and the showbread table . Most recently, Fergus Millar and, following him, Michael Sommer assumed that this conspicuous accumulation of Jewish cult objects in the propaganda of the Flavians had assigned the Jews the role of outsiders, which had shown that Vespasian and Titus had a victory over external enemies of the empire and not over simple rebels would have won.

The northern representation shows the climax of the triumph. Emperor Titus, crowned by the goddess of victory Victoria , moves forward on a quadriga . The warlike dressed Virtus , the brave behavior in war, leads the horses. Honos , the embodiment of the honorable civic virtue, as well as 12 lictors accompany the train.

From a message from Cassiodor it can be deduced that the arch carried the larger than life statue of the emperor Titus, presumably as the driver of a team of elephants. Cassiodorus reports that the Gothic king Theodahad commissioned the restoration of bronze elephants on the Via Sacra in 535 and 536 .