The Neretva ( Cyrillic  Неретва , Italian Narenta ; in ancient times, Greek  Νάρων , Latin Naro ) is the most important river in Herzegovina . It is 225 km long, 203 km of which are in Bosnia and Herzegovina and 22 km in Croatia .

On the upper Neretva near Glavatičevo

The Neretva has its source in about 1100  m near Držirep ( Gacko municipality ) south of the Zelengora Mountains , near the Sutjeska National Park and the Montenegrin border. The spring is located a good 60 km south of Sarajevo and 20 km southwest of Foča . The young mountain river initially flows in a north-westerly direction through a sparsely populated valley between the mountains Lelija , Visočica and Bjelašnica in the north-east and Crvanj and Prenj in the south-west. The surrounding peaks rise to heights of over 2100  m . Recently, plans have been published that provide for the construction of dams on the previously almost untouched upper reaches of Glavatičevo . Environmentalists, on the other hand, are calling for a national park to be set up in this region. In addition, a dam has been under construction since 2010 at Ulog in the west of the municipality of Kalinovik ( Republika Srpska ). However, the work was interrupted in 2013 due to insufficient stability of the subsurface and so far (as of February 2017) it has not been resumed.

Route of the Narentabahn before the construction of the Neretva dams

From Konjic , the Neretva valley serves as the most important transport corridor between Sarajevo and Mostar . The river is dammed here to the Jablaničko jezero . After about 80 kilometers, it turns south at the confluence of the Rama north of Jablanica and from then on crosses the Neretva Gorge ( Neretva klisura ), which extends to Mostar. This area was the scene of the Battle of the Neretva between the Axis Powers and the Yugoslav People's Liberation Army under Josip Broz Tito in the spring of 1943 . A few kilometers before Mostar, the Neretva is dammed again.

At the middle course of the Neretva lies Mostar, the largest and most important city in Herzegovina , which is divided into two halves by the river. While mainly Catholics traditionally live on the right (western) bank, the eastern part of the city is mainly populated by Muslims. During the Bosnian War , the river marked the front between Croatians and Bosniaks here for some time . The famous Old Bridge ( Stari most ) from Ottoman times linked the two banks until it was destroyed in 1993 and has been connecting them again since the reconstruction in 2004.

Behind Mostar, the narrow gorge opens to a wider plain, which closes again at the confluence of the Buna . The Neretva flows through a narrow valley for another 20 km. At Počitelj , whose fortress used to dominate the course of the river, the gorge opens up gradually before the lower reaches of Čapljina at the confluence of Trebižat (from the west) and Bregava (from the east) begins. Other smaller tributaries in this area are Repesnica, Rakitnica, Ljuta, Ladanica, Župski Krupac, Bukovica, Bijela, Krupac, Narin and Rama. 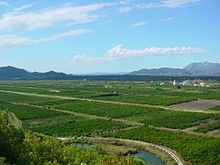 On the approximately 40 km long lower reaches of the Neretva, their plain is used intensively for agriculture. In the area of ​​Bosnia-Herzegovina, this only affects the area between the river and the Hutovo Blato marshland , while the actual Neretva river delta only begins behind Metković and thus belongs to Croatia .

Near the city are the ruins of the ancient city of Narona , whose importance at that time depended on its location on the river and near the sea. For the last 25 km from Metković, the river has been navigable for small ships since regulation in 1895. The Neretva Delta plays a major role in agriculture in the southern part of the country, as it is one of the few irrigated and very fertile plains in the region. Since 1881, and to a greater extent after 1945, large parts of the marshland were drained and made usable for agriculture. In the course of the work, only three of the former 12 river arms remained.

In Ploce in Croatia the river meets the Adriatic Sea .

The Neretva drains most of Herzegovina; its catchment area has an area of ​​5581 km². At its mouth, the average flow rate is 378 m³ / s. This makes it the most water-rich river in Bosnia-Herzegovina after the Save and also the only Herzegovinian river that runs exclusively above ground.

The Neretva is the only major river that breaks through the Dinaric Mountains in a north-south direction. Their valley as part of the geological Neretva Bosna - furrow was therefore now always been an important transport corridor of the Pan-European Vc Corridor belongs. The first rail link through the valley was built between 1872 and 1882 and later merged into what is now the Sarajevo – Ploče line of the railways of the Federation of Bosnia and Herzegovina . South of Konjic, the M-17 main road also runs essentially along the Neretva.

Shipping is only possible on the lowest river kilometers between the mouth and Metković.

The course of the Neretva in the area of Bosnia-Herzegovina initially belongs to the association communities of the Republika Srpska Gacko and Kalinovik for a few kilometers . However, most of the river runs in the Herzegovina-Neretva Canton of the Federation of Bosnia and Herzegovina through the municipalities of Konjic, Jablanica, Mostar, Čitluk and Čapljina . The last 22 km belong to the Croatian Dubrovnik-Neretva County . 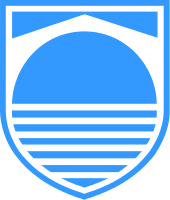