The Vilayet , outdated popular transcription Vilayet ( Persian ولايت; Arabic ولاية wilāya  'ruling power'), was a territorial administrative unit in theOttoman Empire. A distinction must be made between the general and the technical use of the term.

The term already appears in Seljuk times and describes a territorial unit in the provincial administration. The scope and structure can no longer be traced from the incomplete source material. In Ottoman times, this non-technical use gradually concentrated on the top level of the administrative hierarchy , the Eyâlet , for whose head the term Vali (instead of the earlier Beylerbey ) was also used.

In addition, the word denoted two specific administrative units at different times in the sense of a term technicus .

In the early days of Ottoman rule in the Balkans up to the 16th century, Vilayet was used to designate administrative areas that were part of a sanjak . It is believed that these Vilayets reflect pre-Ottoman domains. Thus, in 1468, after the conquest of Bosnia, the Sanjak Bosnia appears divided into 6 Vilayets, from whose names there are references to the pre-Ottoman rulers. These vilayets disappeared during the reign of Suleyman I. There is no evidence of this type of administrative district outside the European part of the empire.

During the reform period of the Tanzimat , the Vilâyet was again used to designate a specific territorial unit, namely the Greater Province, which was to replace the Eyâlet as the top-level administrative unit from 1864. A far-reaching administrative reform was associated with the renaming. The model was the French department . At the head of the Vilayets administration stood the Vali. The Vali was supported by a general council ( meclis ) whose members were partly elected and partly because of their function. Under Vilayet were Sandschaks set up as next lower administrative bodies. Only the sanjaks on the periphery of the province had their own sub-governors ( Mutasarrif ), the central sanjak was administered by the Vali himself.

The principles of the reform were first applied in 1864 to the Danube Vilâyet ( Tuna vilâyeti ), from which the Principality of Bulgaria emerged in 1878 , and extended to the whole empire from 1867 to 1884. For strategic, political or religious reasons, some sandjaks remained directly subordinate to headquarters as "independents".

Some Arab successor states of the Ottoman Empire took over the administrative areas as wilâya .

The following important information is still missing in the following paragraph:
The section only contains information for a geographic region, and if applicable also the date of establishment
Help Wikipedia by researching and pasting it .

In 1864 the geographical region of historical Macedonia was divided into six large provincial administrative districts of the Ottoman Empire, so-called Vilâyets. The six Macedonian vilayets were as follows (the respective capitals or political centers as well as their current national affiliation are given in brackets):

A central administrative region for the entire geographic region of historical Macedonia did not exist during the Ottoman Empire until 1903. 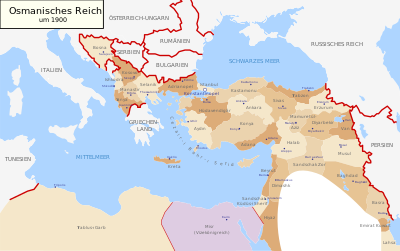 Around 1900 the following vilayets existed, name of the capital: