This article covers the city in the Republic of Cyprus. For the northern part of the city see North Nicosia , for the Italian commune in Sicily see Nicosia

Nicosia has been around since the 7th century BC. Proven. The prism of Esarhaddon of 673 / 672 v. BC mentions a king Unasagusu of Lidîr. The ancient name was Ledra. 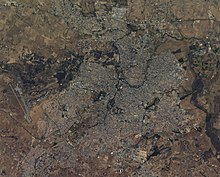 The title of Vice Count of Nicosia was also available to Greek aristocrats in the Venetian period , usually against payment to the Signoria of Venice . "Visconti" from Nicosia were among others:

In the 1930s, the Venetian City Walls were restored by the Department of Antiquities under the direction of Peter Megaw , partly as a job creation measure . In 1949 the luxurious Ledra Palace Hotel was opened.

Under international law, the city ​​belongs in its entirety to the Republic of Cyprus , which, however, has not exercised any de facto sovereign rights over North Nicosia since the occupation of northern Cyprus by Turkish armed forces and the proclamation of the Turkish Republic of Northern Cyprus in November 1983 . Since then the city by a "Green Line" ( English Green Line , Greek πράσινη γραμμή, Turkish yeşil has ) divided by United Nations peacekeeping , the United Nations Peacekeeping Force in Cyprus ( UNFICYP is) monitored.

There is the US Embassy in Nicosia .

Nicosia in the late 16th century. Engraving by Giovanni Francesco Camocio, around 1570

The Makarios Avenue in the center in the early evening

In the southern part of the old town there is a lively cultural life with a few restaurants and pubs, especially in the area around the Famagusta Gate (πύλη Αμμόχωστου). Traditional shops and craft shops are scattered all over the old town. In the Ledra Street , which at the Freedom Square (Freedom Square; Πλατεία Ελευθερίας) and ends up to the Green Line leads, are the larger and more modern shops. The Laikí Jitoniá (Λαϊκή Γειτονιά; roughly: local / traditional neighborhood) is a district that is primarily used for tourism.

Both the north and south parts of the old town fell into disrepair due to the subdivision-related peripheral location. For several years, historical buildings, especially medieval Cypriot and Venetian ones , have been restored. On April 3, 2008, the first border crossing point within the old town (only for pedestrians) was opened in Ledrastrasse.

The almost five kilometers long Venetian fortress wall was built in 1567/1568 and surrounds the old town with eleven bastions in a star shape . Five bastions are in the south (clockwise): Caraffa , Podocataro , Constanza , D'Avila , Tripoli , five in the north: Roccas (Turkish Kaytazağa) , Mula (Zahra) , Quirini (Cephane) , Barbaro (Musalla) , Loredano ( Cevizli) , the Flatro (Sibeli) bastion is divided, on it there are border guards from both sides and a UN post.

South of the city

North of the city

Nicosia is roughly in the middle of the island, and many roads lead from there in a star shape to the coastal cities. The A1 connects Nicosia with the south coast motorways , the A9 leads west to the Troodos Mountains. The municipal company OSEL operates inner-city bus routes, there is also the regional Nicosia bus .

In the west of the city, in northern Cyprus, is the Ercan airport , which is accessible via a 4-lane expressway; Larnaka airport on the south-east coast of the island is used for the southern Cypriot part of the city . The old Nicosia Airport has been closed since 1974 because it is in the UN protection zone.

The headquarters of the Bank of Cyprus , the largest Cypriot bank, is located in Nicosia-Strovolos .

According to the census of January 31, 1879, the city, which was still undivided at the time, had 2,463 houses and 11,197 inhabitants. They were distributed among different religions as follows:

The list contains an alphabetical overview of important personalities born in today's Nicosia. It is irrelevant whether the people later had their sphere of activity in Nicosia or not. Many moved away after their birth and became known elsewhere. The list does not claim to be complete.

Wikinews: Nicosia  - on the news

Capitals of the member states of the European Union

See also : Member States of the European Union
V
Municipalities in the district of Nicosia in Cyprus