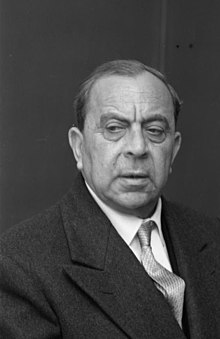 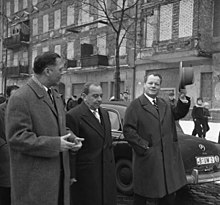 Statue of Fazıl Küçük near the Kyrenia Gate in North Nicosia

Fazıl Küçük, the son of a farmer, was born in Nicosia in 1906. Küçük studied medicine in Istanbul , at the University of Lausanne and in Paris . After returning to Cyprus in 1937, he opened a practice, because of his interest in politics, he campaigned for the rights of the Cypriot Turks. In 1941 Küçük founded the newspaper Halkın Sesi ('The Voice of the People'), of which he became the editor-in-chief . Due to his campaign against the British colonial administration, his newspaper was not given permission to publish until 1942.

In 1943 he was one of the founders of the Kıbrıs Adası ; Türk Azınlık Kurumu ('Association of the Turkish Minority of the Island of Cyprus', KATAK). The party's aim was to promote the social, economic and political well-being of the Turkish Cypriots. Due to differences of opinion with some members, Küçük left the KATAK and founded the Kıbrıs Türk Milli Birlik Partisi ('Turkish Cypriot National Unity Party'). As early as 1949, when the then fifty-year-old Necati Özkan was visiting Ismet Inönü , he sent a telegram to the Turkish president against his most influential adversary. Küçük denied Özkan the right to speak for the Turkish minority. After 15 years of dispute, Küçük advocated the transfer of the Evkaf , a Turkish religious fund, from England to Cyprus. On April 14, 1956 he became president of the Evkaf, Osman Örek vice-president. In May 1959, on a visit to Ankara, he received a loan approval for £ 125,000. This behavior of asking for loans only for the Turkish community continued over the next few years, so that the Greek community demanded that such economic support be given to the whole island, not just a minority.

During the independence negotiations in the run-up to the Zurich and London agreements , Küçük continued to exclusively represent the Turkish-speaking population of the island and enforced constitutional guarantees for this minority. On December 3, 1959, Küçük was elected Vice President of the new republic, which in 1960 finally became independent. The parliament consisted of 35 Greek and 15 Turkish MPs. Küçük had support above all from the younger Turkish population born after 1920. He also received support from Turks in the diaspora and from nationalist circles in Turkey in the late 1940s and 1950s. These supporters included Rauf Denktaş, born in 1926, and Osman Örek , who was one year younger , his two closest allies, but also Burhan Nalbantoğlu and Mithat Berberoğlu , who were born in the same year as Örek.

After the attempt by the Greek Cypriots to change the constitution (Cyprus conflict), Küçük remained Vice President of the Republic of Cyprus until 1973. He was followed by Rauf Denktaş in office (until 1974). Despite illness, Küçük continued to publish his newspaper. He died in London's Westminster Hospital on January 15, 1984, two months after the Turkish Republic of Northern Cyprus unilaterally declared independence.