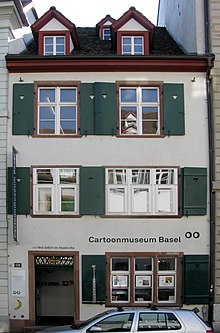 The Cartoon Museum Basel is dedicated to the topics of cartoons with and without text, parodies and pastiches about works of art and artists, caricatures , depictions on topics from culture and everyday life as well as general political nature. The Basel Museum is the only one of its kind within a 500-kilometer radius.

The collection of around 3,000 original works by over 700 artists of the 20th / 21st centuries from around 40 countries is presented in temporary exhibitions. In addition, there are two to three exhibitions each year, which are thematically or monographically oriented and present works from their own holdings as well as loans. The museum's collection policy is aimed at making a representative and high-quality selection of cartoons and caricatures from all over the world.

In addition to the exhibitions, the museum also has a reference library with literature on the subject of cartoon, caricature and comics . The around 5,000 specialist publications also include magazine series such as Der Bärenspiegel , Nebelspalter , Fliegende Blätter , Meggendorfer-Blätter , Kladderadatsch , Münchener Bilderbogen , L'Assiette au Beurre , Le Rire , Punch or The New Yorker .

A museum shop with new and antiquarian books, posters and postcards complements the museum offer.

View from the new building to the old building, on the right the glazed transition

The Foundation for Caricatures & Cartoons was founded in 1979 by the Basel patron Dieter Burckhardt and is now an independent foundation affiliated with the Christoph Merian Foundation . The first museum director was the caricaturist Jürg Spahr alias «JÜSP».

After a change of domicile in 1996, the exhibition rooms are located in an old late Gothic building. This was gently renovated by the two architects Herzog & de Meuron and complemented by a contrasting new building.