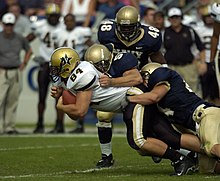 Dustin Dunning is pulled to the ground

Under a tackle ( Engl. "Attacked accept", "handle") are understood in American football , the To-Ground bringing a ball carrier by a physical procedure. Here, the opponent is physically hindered from moving and thus thrown off balance (a so-called hit ) or, as is the case with more powerful attackers, pulled to the ground. Since a play is over when a body part of the ball carrier out of the hands and feet touching the ground, is a successful tackle the end of the play ( play ), while an attempted, but faulting Tackle Lost or Broken Tackle is called. If the use of the tackler is unnecessary or excessively harsh, it is a foul ("Unneccessary Roughness"; 15 yards penalty and automatic first down ).

Another variant of the tackle is the so-called strip ("snatch"), in which an attempt is made to separate the attacker from the ball without the ball being down , i.e. tackled and the play ended. The arm holding the ball is pulled or the ball is hit. A successful strip leads to a fumble . This technique is mainly used with slow opponents, such as. B. the quarterback or sometimes the fullback , as these can be tackled by other defenders after a failed strip or such a maneuver is very promising due to the surprise effect, especially with a probable sack from behind.

Players who are not or no longer in possession of the ball may not be tackled. With a few exceptions (in which any contact is prohibited, e.g. obstructing the pass), opposing players may only be blocked from walking using their body mass (so-called blocking). You can only push with your hands; Pulling or holding on is a foul when blocking. Blocking from behind is generally prohibited; During kick play moves, blocking from the front is only permitted above the belt line.

In the low-contact version, the flag football , physical contact is replaced by pulling out a strip of fabric or plastic, the flag , attached to the side of the belt .