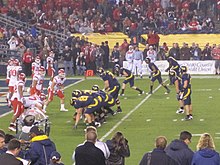 Setup for the two-point conversion

The Two-Point Conversion (TPC) is an alternative to the point after touchdown in American and Canadian football . It is an attempt to score two points after a touchdown . Depending on the rules, the offense that has just scored starts at the 2 or 3 yard line. In Canadian Football, the attacking team starts from the 5-yard line. If the offense loses the ball and the defense wins it, they have a chance to score two points by running back into the other end zone.

The two-point conversion was only invented and introduced in 1958 as an alternative to the normal extra point attempt by a kick for college football teams. The reason for this rule change were many games with a tie, when both teams scored the same number of touchdowns, and the game should be made more exciting for the spectators. In addition, the kick had a much higher probability of success, as it was quite difficult to bridge the necessary two yards for the two-point conversion due to strong defensive linemans . Despite this initially bad reputation, the two-point conversion was often decisive in the early years, for example in an eight to six win for Yale University against Connecticut State University .

In the US professional league, the National Football League (NFL), the attacking team from the opposing 2-yard line must successfully complete a play in the opposing end zone to score two points. The two-point conversion can only be carried out after a touchdown. If the attempt fails, the team does not receive any extra points and must then carry out the kick-off . The probability of a successful implementation of the attempt is around 50%, which means that it is rarely used and only in exceptional situations, for example if two points are missing to compensate for the last quarter.

The possibility of winning points for defense has been in the NFL since the 2015 season .

Two-point conversions are often used in the amateur sector when there is no good kicker in the team . In some youth leagues, there is no extra point attempt after a touchdown, which is why only two-point conversions may be attempted. The likelihood of a successful conversion is far higher in amateur leagues than in the NFL, for example, as the defensive lines usually work less effectively and less effectively.